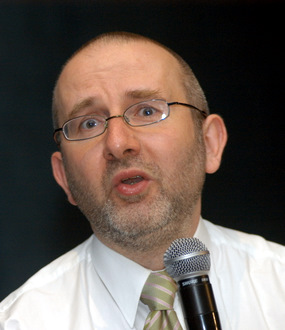 Son of community Yiddish advocate Pinye Ringelblum, Doodie Ringelblum was born in Melbourne on 5 April 1963 and raised in an environment that nurtured Yiddishkeit.  As a child and teenager he recited Yiddish poetry at numerous community functions including various Landsmanschaftn, Holocaust commemorations, the Bund’s 19 April Warsaw Ghetto Commemoration and Soviet writers’ evenings.  In addition he was an active member of SKIF, first as a participant, then a helfer (youth leader) for six years from 1980-1986, Komendant (Head) of the movement from December 1982 to January 1985 and Shotn Komendant from 1985-1986.  Doodie was a student at Caulfield North Central School and Melbourne High School.  He then went on to study medicine at Monash University graduating in 1986.  He now works in general practice.

Doodie graduated from the I.L. Peretz Yiddish School in 1978 and following private study with his father, became a Yiddish teacher at the Sholem Aleichem Sunday School for four years from 1981-1984.  Doodie has, over the years, also been involved with Yiddish radio and theatre, including 3CR, 3ZZZ, 3EA (later SBS) and is currently the ‘radio doctor’ for the SBS Yiddish program.   His theatrical engagements include appearing with the David Herman Theatre in 1976 in Di hiltzerne shisl (The Wooden Dish) with Shia Tigel, Yasha Sher and Rachel Holzer.  He also was a member of the Melbourne Yiddish Youth Theatre (later renamed the Melbourne Yiddish Theatre) and appeared in multiple productions including MazelTov Cobbers, Vu ahin zol ikh gayn? (Where shall I go?), nign (Songs) and Fiddler on the Roof.

Doodie has also been active in the broader community: fundraising for Keshet (Jewish Aid), a member of theGeneration journal production team and later joining its editorial committee.  He served for approximately eleven years on the In One Voice, Concert in thePark committee, including six years as its chairperson.  This cultural community event attracted some 1,500 participants from all sectors of the Jewish community and showcased the diversity of cultural life in Melbourne.  It attracted about 15,000 attendees making it arguably one of the largest community events in the southern hemisphere.

Doodie has taught bar and bat mitzvah students and is a member of Sholem Aleichem College, the Kadimah and a committee member of the Bund.  He has been active with the Australian Jewish Democratic Society and the Secular Humanist Society.  In addition he is on the committee of the annual Sof Vokh.

Doodie is married with three children who he is raising to speak Yiddish as their first language.