Yiddish theatre was significant in Melbourne’s cultural life.  From its very beginnings at the start of the twentieth century, Yiddish theatre recreated the Jewish world that migrants had left behind in Europe and filled its audience with nostalgia.  It was the theatre that had a restorative and remedial effect on the immigrants who trod a line between the old world and the new.  Talented, passionate immigrants with experience in professional theatre in Europe were among the immigrants.  They established a core Yiddish theatre in Melbourne, which leading Yiddish actors and directors visited and raised performance levels to a high theatrical standard.  It was their passion and skill and devotion to Yiddish theatre which transmitted to a youth ensemble who continued to perform locally devised musicals until the 1990s. The very first Yiddish theatre performance in Australia was Chaim Reinholtz’s production of Abraham Goldfaden’s operetta Shulamis in Sydney in 1905.  Three years later, in 1908, Shmuel Wajsberg arrived in Melbourne from Pietrkow, Poland and a year later, in February 1909, Wajsberg staged the operetta Gavriel popularly known as Chinke-Pinke in Yiddish.  This can be marked as the beginning of Yiddish theatre in Australia and it is Wajsberg who deserves the title of ‘the father’ of Yiddish theatre in Australia.  His miniature group of performers developed a varied repertoire which included cheap comedy and quality literary plays.  But financial problems and disagreements about artistic direction soon ended in a split.

Two permanent theatre troupes were established post World War One with the influx of Yiddish speaking immigrants and the impetus of the establishment of the Kadimah Library and Cultural Centre in 1911.  The first was The Kadimah Theatre Circle and the second was Di Yiddishe Bineh (The Yiddish Stage), established in 1927 by Yankev Ginter, a professional actor with ten year’s experience in the Yiddish theatre in Poland. 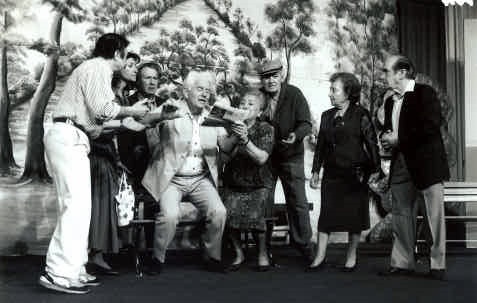 In 1937 the young Yiddish actor Avrom Brayzblat, arrived in Melbourne and after a few years staged the popular musical Di Kishev Makhern / The Magician by Itzik Manger, in which he played the old witch.

Jacob Waislitz arrived in Australia in 1938.  He was already a well-known actor with the Vilna troupe, having toured Poland, Lithuania and Western Europe with the famous Dybbuk by Shin Anski, and other productions.  After arriving in Melbourne he recited at an evening to mark the first yohrtzeit (anniversary of the death) of David Herman, the director of the Vilna troupe.  Subsequently he joined Yakov Ginter’s Di Yiddishe Bineh (The Yiddish Stage) theatre group which then renamed itself the David Herman Yiddish Theatre group and that name remained part of the Melbourne Yiddish theatre scene for decades to come.

In 1939, as part of a world tour, the well known Polish Jewish actress and poetry and prose performer, Rachel Holzer, together with her husband, Yiddish writer, translator and theatre critic, Chaim Rosenstein, arrived in Melbourne.  That year she performed in the modern play Froy advocate / Lady Lawyer, a comedy by Louis Verneuil about a woman’s right to an independent career.  The play had been translated from French into Yiddish by Holzer’s husband Rosenstein.  As well as playing the lead role, Holzer directed the play.  The couple intended to stay for only six months, but World War Two intervened and she and her husband remained in Melbourne for the rest of their lives.  Meanwhile, also in 1939, Yakov Ginter staged Tog un Nacht / Day and Night by Shin Anski and between Ginter, Waislitz and Holzer, eight Yiddish plays were performed in Melbourne between late 1939 and the end of 1940.

Holzer and Waislitz raised the theatrical standard in Melbourne so that it became a model for fine Yiddish theatre.  In the following five decades, the David Herman Theatre at the Kadimah staged several plays each year, with ten or more performances each and some of them being performed several times over. With the passing of Jacob Waislitz in 1966 and the retirement of Rachel Holzer, the David Herman Theatre at the Kadimah began to rely on a younger generation of actors and on directors visiting from overseas.  Local stalwarts like Rochl Levita, Yasha Sher and Shia Tigel were the most prominent local talents.  They continued to stage modern and traditional themed plays such as A Tog in ir Lebn / A Day in her Life and Melech Freylech, as a whole string of international actors and directors began travelling  to and from Australia with the advent of comfortable air travel.

Among the great names of the Yiddish theatre who travelled to Australia were Zygmunt Turkow, Ida Kaminska, Yosef Shein, Shimon Dzigan, Hayele Grober, Tsvi Sztolper, Leah Kenig, Josef Rotboym, Shmuel Atzmon, Yisrol Berkowitz, Dina Halpern and Rosa Turkow, who came out every year for many years, bringing new, modern dramas, comedies and plays from Israel.  These were often translations from Hebrew; plays such as Di Ksube / The Marriage Contract, Mayn Mame der General / My Mother the General, In Harts fun Tel Aviv / In the Heart of Tel Aviv, in 1992.  Sadly, this was the last play staged by the David Herman Theatre at the Kadimah.  It had begun performing for the Jewish community in 1938.

Coinciding with the revival of local Australian theatre in the late 1960s, the actress and director Fay Mokotow, a prominent member of  SKIF-Tzukunft, staged a hugely successful Israeli production of the great Yiddish poet Itzik Manger’s Megillah Lider with music by Dov Seltzer. She took the Megillah and staged it in an avant-garde, minimalist fashion with the youth of the SKIF-Tsukunft organisation.  It proved to be a big hit in the Melbourne and Sydney Yiddish communities and motivated Fay Mokotow, Alex Dafner and others to form the Melbourne Yiddish Youth Theatre at the Kadimah.

The MYYT ensemble became very active in the early 1970s and in quick succession they staged Two Weeks at the Kinneret by Efraim Kishon, translated and directed by Tzvi Stolper, Arthur Miller’s The Price, translated into Yiddish by Melbourne poet Dobke Apelowicz and Sholem Aleichem’s Dos Groyse Gevins,also directed by Fay Mokotow.  They participated in a re-staging of Der Kishev Makhern with the David Herman Theatre, directed by, and starring, Dinah Halpern. 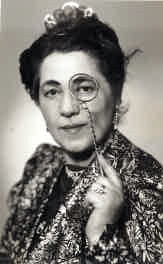 Yiddish actress Leah Zuker in the 1953 production of “Madame Dulska”

Following the illness and premature death of Fay Mokotow there was a hiatus in the youth theatre’s activities. The MYYT revived in the early 1980s with a series of concerts.  In 1983 Charles Slucki directed The Diary of Anne Frank translated for the first time into Yiddish by Dobka Apelowicz.  She also translated the Neil Simon comedy hit, The Sunshine Boys, staged by the MYYT as Di Shtern fun Broadway / The Stars of Broadway, directed by her son, Itzl Apel.

In 1988 the MYYT began performing musicals that included Yiddish songs and English dialogue.  They began with the hugely successful Nign concert in 1988 and the re-staging of the Megillah in 1993.  They went on to stage Arnold Zable’s story of Jewish migration Vu Akhin Zol Ich Geyn? / Where shall I go?  staged in 1994.  This was followed by the story of the first one hundred years of Jewish migration to Australia in 1995, Mazl Tov Cobbers, by Alex Dafner and Leon Gettler.

The last large and successful production staged by the MYTT in 1998 was Fiddler Oyfn Dakh / Fiddler on the Roof, directed by Arlette Pat.  In that production the songs were sung in Yiddish and the dialogue spoken in English.  Since then, there have been a number of concerts and short performances by Yiddish actors and singers, the most recent the Chai Society variety concert held at the Kadimah on 30 June 2010, with a mixture of older and younger performers.

Sources:  This section is based partially on a presentation made by Alex Dafner at Limmud Oz 2010, held at Monash University on 13/14 June 2010; Zable, Arnold, Wanderers and Dreamers: tales of the David Herman Theatre (Hyland House: Melbourne 1998).