The Landsmanshaftn were societies of immigrants who came from the same town or region.  They were named for the members’ birthplace in Europe.  In Melbourne they emerged with the arrival of Yiddish-speaking refugees.  The earliest was the Bialystocker Centre, founded with the first wave of Yiddish immigrants in 1928, but they were given stronger impetus when Holocaust survivors settled in Australia.

The Landsmanshaftn were integral to the new immigrants’ adjustment in their Australian home since they provided emotional, cultural, social and even financial support.  At the same time, these organisations were important fund raising bodies for the Jewish Welfare Organisation and later for the United Israel Fund.  In 1955 there were known to be scores of Landmanshaftn in Melbourne.  Meetings were held in private homes, at the Kadimah and in a designated “home” such as the Bialystocker Centre. Members shared memories and the mutual comfort and support helped many develop resilience and roots in their new and strange land. Individuals from particular hometowns and areas, who wished to immigrate to Australia, received aid to the extent that some Landsmanshaftn offered temporary hostel homes to newly arrived refugees.  In the 1940s and 1950s the Bialystocker, Warsawer and Radomer Landsmanshaftn maintained separate refugee hostels in Robe Street St Kilda, Punt Road South Yarra and Williams Road Windsor respectively. Arthur Calwell at the Bialystoker Centre with Mr and Mrs Sender Burstin, circa 1948

A journal, Der Landsman, published by the Federation of Polish Jews and the Federation of Landsmanshaftn in Australia, appeared regularly from December 1964 until September 1970 and occasionally after that until 1991.  As the immigrant generation diminishes, the Landsmanshaftn have declined and dwindled.  In 2010 the Bialystocker, Krakower, the Warsaw Centre, the Lodzer Centre, Zaglembier, Chelmer, Lomzer, Kalisher and Radomer Landsmanshaftn still exist in Melbourne. 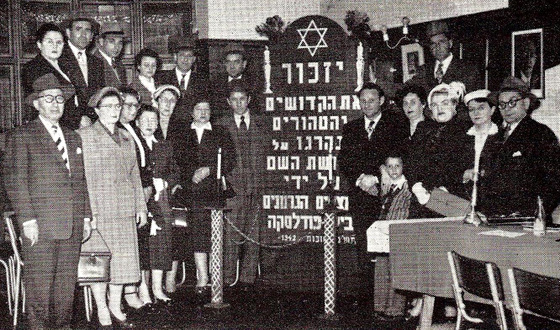 Biale Podlaske Landsmanshaft with a symbolic headstone commemorating the destruction of their town, circa 1960