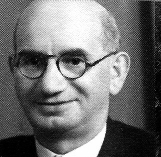 A professional Yiddish actor in his native Poland, Yankev Ginter was born in Lodz in 1893.  He was the son of Emmanuel Ginter, a manufacturer and was one of six siblings, two of whom also acted on the Yiddish stage. Yankev decided to leave Poland in order to give his family greater opportunities and a better life.  Together with his wife, Tobele, and daughters, Miriam and Faye, Yankev decided to follow his sister Yides Silman to Australia.  The Ginters arrived in Melbourne in 1927.  The rest of the extended Ginter family was soon to follow.

Yankev was not able to support his family as a professional full time actor and so worked night shift in a sock factory until 1930 when the factory closed.  He and his wife then hired two machines and started manufacturing socks themselves in Johnston Street Collingwood.  But Yiddish theatre and Yiddish life remained an enduring passion for Yankev, as were the ideals of social justice and concern for the underprivileged.

Yankev was an inaugural member of the Bund in Melbourne at its first meeting in 1928.  He directed the Kadimah ensemble in several of its productions and went on to establish his own company, the Yiddishe Bineh soon after his arrival in 1928.  Yankev became a leading actor on the Yiddish stage in Melbourne, performing in and producing many of the great classics of the Yiddish theatre.  His generosity extended to the use of his home at 167 Albert Street Brunswick as a venue for rehearsals and the welcoming of new arrivals.  In addition he was involved in the early discussions concerning the establishment of the I.L. Peretz Yiddish School in the early 1930s, the first meeting of which was held in his home.  Yankev was a foundation member of the Relief Fund (later to become The Jewish Welfare Society).