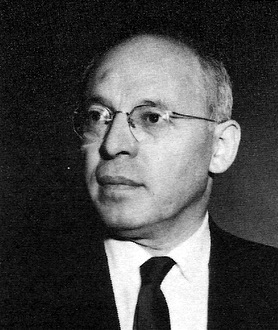 A tireless worker for Jewish Welfare, successful businessman Leo Fink was born in Bialystok on 31 October 1901 to a middle class family.  He was educated at the Zeligman Gymnasium, worked in a pioneer corps in Palestine for two years and studied engineering in Berlin and Altenburg Germany between 1922 and 1926.  After an unsuccessful family business venture in Romania, Leo and his two brothers immigrated to Australia in 1928.

The brothers moved to Melbourne after working for a year on a farm in Berwick established to assist Jewish settlement.  They founded their own business which began when  another brother, who had arrived from Europe, brought in a knitting machine.  This ultimately led to the creation of United Woollen Mills Pty Ltd and United Carpet Mills Pty Ltd.  On a visit to Bialystok in 1932, Leo met and married Mina (Miriam) Waks.  They returned to live in Melbourne.

By 1938 Leo was an active committee member of the Kadimah and in 1943 became its president.  From 1943 – 1947 he led the United Jewish Overseas Relief Fund, established to assist survivors of the Holocaust.  Under his stewardship it quickly became the largest Jewish organisation in Australia  and  Leo became a leading advocate for the unrestricted immigration of Holocaust survivors to Australia.  He established close ties with Arthur Calwell, Minister for Immigration in the Chifley Government.

Leo was awarded the Coronation Medal in 1954 and an Award of Honour from the US based Hebrew Immigration Assistance Service (HIAS) in 1959 for his unstinting devotion to the Jewish community and in particular his care and concern for new immigrants.