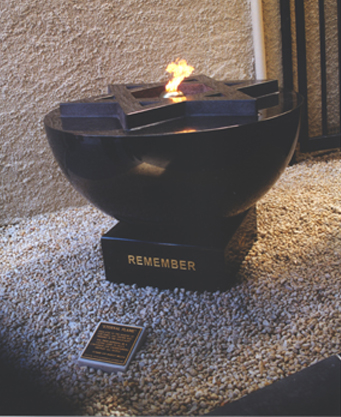 Eternal flame at the entrance to Holocaust Centre

Dedicated and committed Yiddish speaking men and women were amongst the visionary founders of Australia’s first Holocaust Museum and Research Centre, established in 1984.  Immediately after his liberation in 1945, Aron Sokolowicz began collecting World War Two photographs and memorabilia.  Following his arrival in Melbourne in 1957, these were used as part of mobile or temporary Holocaust exhibitions during the 1960s and 1970s.  Links with the Yiddish speaking community were always strong through the Kadimah, which after World War Two was always active in Holocaust commemoration.  Together with the Federation of Polish Jews, Kadimah members raised money in the late 1970s and early 1980s and developed the model for a proposed permanent museum.

On 24 March 1983, a key meeting was held to discuss the establishment of the Centre and to draft a constitution.  The building adjacent to the Kadimah in Elsternwick was purchased with donations from the community, including a major gift from Mrs Mina Fink in memory of her husband, Leo Fink.

Aron Sokolowicz and Bono Wiener, the first co-presidents, assisted by Mina Fink, Abram Goldberg, Mottel Roth and Yosl Winkler, were the driving force who worked to establish the Holocaust Centre.  Yiddish was their lingua franca and that of most of the people who established the Centre.  The survivors who built the Centre were also memorialising mame loshen (mother tongue), since this had been the language of the majority of Jews who were confined to the ghettos and camps.  Initially all meetings were conducted in Yiddish and minutes were recorded in Yiddish.  Captions and written texts about items exhibited were, and still are, in Yiddish and English, and Yiddish was the language spoken by the early volunteers who worked at the Centre.

On 24 October 1999, a new and greatly enlarged Centre was opened and it was in the few years after this that the Centre moved beyond a workforce based on volunteer survivors and one part-time secretary, to a professional staff which works together with the survivors and a new and younger generation of volunteers to educate for the future and remember the past.