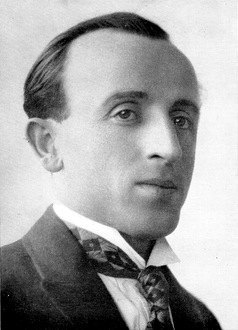 Community figure, ardent Zionist and successful wine merchant, Samuel Wynn was born Shlomo ben David Weintraub in Ushimow, a town near Lodz on 4 April 1891.  Even though he received a religious education and attended a Yeshivah in Nova Minsk for a short period, by the age of fourteen Samuel was interested in more liberal pursuits.  He joined the family raisin wine business in Lodz and in 1912 married Eva Silman, the first of his three marriages.  To escape military service Samuel migrated to Australia with his wife, arriving on 12 November 1913.

After a range of jobs from farm worker to cellarman, Samuel purchased the first of many successful wine merchant businesses in 1918.  By 1924 he owned three retail stores and by 1925 was selling his own wines under the Boronia label.  The business expanded rapidly and by 1950 the company purchased what was to become Coonawarra.  In 1970 Wynn Estate Pty Ltd was listed as a public company.  The company was sold to Allied Breweries and Tooheys Ltd in 1972.

Throughout his life, Samuel Wynn was actively involved in the Jewish community, becoming its proud advocate and one of its leaders.  His biographer, David Dunstan, described him as “tenacious” and “courageous” in both his community involvement and in his business dealings.  Samuel lost sixty-seven members of his extended family in the Holocaust.  He was a strong Zionist and, according to Dunstan, prior to the establishment of the State of Israel in 1948, he made ten trips to Palestine carrying small arms into the country at his peril.

In 1919 he was elected President of the Kadimah, a position he held twelve times.  In 1922 he helped establish the Victorian Jewish Welcome Society charged with assisting new immigrants: meeting them at the boats, finding accommodation and employment and teaching them English.  In 1944-45 he was elected to the Board of the United Jewish Overseas Relief Fund.

From 1951 to 1953 he was a Board member of the Australian Jewish Welfare and Relief Society.  He was President of the State Zionist Council during the Second World War and was twice elected President of the Zionist Federation of Australia.

Samuel Wynn was a regular participant at community functions and often attended major fundraising events.  The Lodzer Landsmanschaft welcomed him as one of their own and in its heyday he was often seen at their social functions.  The Landsmanschaft organised birthday celebrations for his 70th, 75th and 80th birthdays.