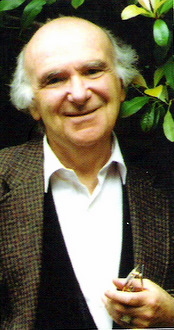 Writer, poet and storyteller, Jacob ben Gershon Rosenberg was born in Lodz Poland in 1922, the youngest of three siblings born to Gershon and Masha Rosenberg, both of whom were textile workers and members of the Bund.  From an early age Jacob showed a passion for literature, particularly the French and Russian classics.  He was always writing and reading.  He attended the Medem School for his primary education but did not complete his secondary education due to the outbreak of war.  But writing was to remain his enduring passion.

After the German army invaded and occupied Lodz in September 1939, Jacob was incarcerated in the Lodz ghetto together with his parents, sisters Pola and Ida, and their children.  He remained there until the ghetto was liquidated in August 1944 and was subsequently deported to Auschwitz where the rest of his family were murdered.  He remained in Auschwitz for two months before being sent on to the concentration camp Mauthausen and its sub-camp Ebensee.  He was liberated in May 1945 and spent the next few years in Italy in a DP camp at Santa Maria di Bagna where he met his wife, Esther Laufer.  They married in 1946.  Wanting to leave the destruction of Europe far behind and with help from the JOINT, they secured passage to Australia, departing from Marseille in 1948.

Both Jacob and Esther worked in the clothing business before Jacob established his own manufacturing business.  Jacob also became a regular contributor to Yiddish newspapers and journals, both here and overseas.  He published three volumes of poetry in Yiddish: Snow in Spring (1984), Wooden Clogs Shod with Snow (1988) and Light – Shadow – Light (1992).  By the 1990’s he also began writing in English in the hope of reaching a wider audience.  Three volumes of poetry My Father’s Silence (1994), Twilight Whisper (1997) Behind the Moon (2000) were followed by novels Lives and Embers (2003), East of Time (2005) and Sunrise West (2007).

By that time Jacob’s work was receiving wide recognition.  In 2006 his Shylock: A Shakespearean Pilgrimage was performed in Melbourne.  East of Time,published by Brandl and Shlesinger, was winner of the 2006 NSW Premier’s Literary Award for non Fiction and the winner of the 2007 National Biography Award, as well as being shortlisted for the Australian Literature Society Gold Medal and three major state awards.  Sunrise West won the South Australian Arts Award for non Fiction and the Community Relations Commission Award in the NSW Premier’s Awards.  The Hollow Tree was completed in 2008.