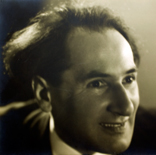 World renowned Yiddish actor and director Jacob Waislitz was born in Poland in 1892.  He graduated from the Yiddish drama academy Hazomir in 1915 and was a Yiddish stage actor from the age of twenty-one.  He joined the world acclaimed, revolutionary Vilner Trupe in 1919 and remained with the ensemble until its final curtain call in 1935.  It was here that Jacob played in the original Vilner Trupe production of The Dybbuk which had its debut in 1920. The play was a sensation.  It was a production that took the Vilner Trupe all over Europe playing to packed houses and prompted the German director, Max Reinhardt, to comment “This is not play acting.  This is a religious rite.”

In 1936 Jacob toured the world performing in Yiddish plays and solo ‘word concerts’.  On 26 January 1938 he arrived in Melbourne as part of a world tour and on arrival was met by Yankev Ginter, another renowned Yiddish actor who had made Melbourne his home.  Jacob’s first solo performance was held on 5 February 1939, followed by a series of highly successful “word concert”.

When war broke out he stayed in Melbourne.  His wife, Jochevet, and son, David, stranded in Vilna during the period of Soviet rule from 1939-1941, were able to escape to Moscow and then, via the Trans Siberian railway, to Vladivostok.  From there they journeyed to Kobe in Japan.  Because Jacob had secured them entry visas for Australia, they were able to board the last boat bound for Australia and arrived here in 1941.  His daughter, the actress Mila Waislitz, who was by then married to fellow actor, Moishe Potashinski, was touring Belgium when war erupted and remained trapped in Europe.

Jacob Waislitz transformed Yiddish theatre in Melbourne.  In 1940, in collaboration with Rachel Holzer he combined the Yiddishe Bine with the Kadimah Drama Circle and various other splinter groups into the David Herman Theatre, named in honour of his mentor and teacher.  By 1943 it was producing up to eight plays annually.  Over the ensuing years Jacob directed and starred in numerous productions and oversaw the golden age of Yiddish theatre in Melbourne throughout the 1940s and 1950s.

He insisted on a standardized Yiddish dialect and a high degree of professionalism from his actors, abolishing the position of prompter and maintaining a strict regime of rehearsals.  He initiated changes in the style and repertoire of Yiddish theatre and brought contemporary plays to the attention of Yiddish audiences.  In addition to his life as an actor Jacob Waislitz served as principal of the Sholem Aleichem Sunday School from 1951-1964.