The number of Yiddish journals, supplements and newspapers produced in Melbourne in the twentieth century reflects the richness of the Yiddish culture of that time.

The technical requirements for a Yiddish printing house were not available in Australia until David Altshul arrived in 1927 with some Yiddish typeset, and the will to begin a Yiddish newspaper in Australia.  After a number of false beginnings, Altshul, together with Pinchas Goldhar as editor, and the backing of the Kadimah committee, launched Oystralyer Lebn in 1931.  The paper was unable to establish itself financially and in 1934 merged with the Jewish Herald to become The Jewish Weekly with a Yiddish supplement Di Yiddishe Vokh / The Jewish Week.  This strengthened both papers.  In 1935 they separated again and the Jewish Herald became a weekly under the editorship of Newman Rosenthal.  The first national Australian paper in Yiddish, Di Yiddishe Nayes, began in 1935 and was circulated with the Australian Jewish News, published weekly in Melbourne by Lazar Rubinstein. 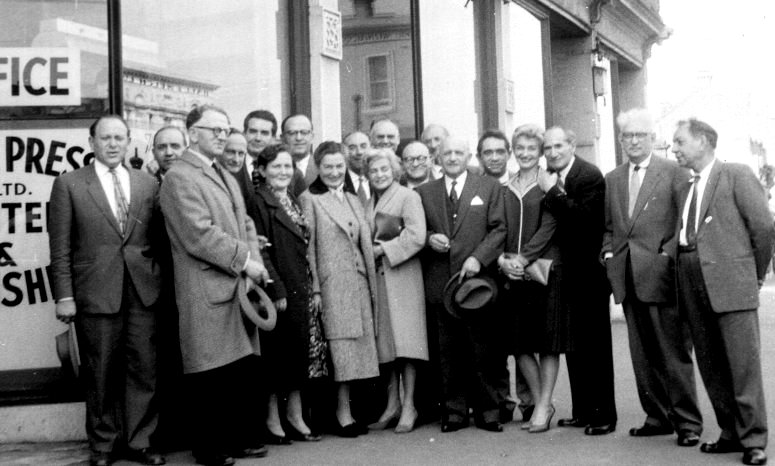 In 1936 the Jewish Herald began publication with a Yiddish supplement of four pages, Der Yiddisher Herald. This only lasted for seven issues.  Again, financial problems caused the paper to fail.  It wasn’t until 1946 that the Jewish Herald introduced Di Yiddishe Post, a regular Yiddish supplement under the initial editorship of Reuben Havin and later Lew Frydman and then Gedaliah Shaiak.  It folded in 1961.

Di Yiddishe Nayes, an optional Yiddish supplement to the Australian Jewish News continued and played a central role in the life of newcomers to the community.  Shmuel Bennett, who arrived in Melbourne at the start of 1939 and shortly afterwards became associated with the Yiddish press as a typesetter, proof reader and assistant editor, writes about the role Di Yiddishe Nayes played beyond that of the written word, providing as it did, a central focus for the cultural mores the migrants brought from Europe.  It was Joachim Chaim Rubinstein, the owner and editor, whose skills and sensibilities caused the Yiddish press to flourish in Melbourne.  His son, Tony Rubinstein, appointed Yehoshua Rapaport as editor after Joachim Chaim passed away.  With his background in Yiddish writing and literary criticism, Rapaport raised the literary standard of the paper. Front page of the first issue of the first Yiddish newspaper to be printed in Australia: Australier Leben (Australian Life), 16 January 1931. Its editor was Pinchas Goldhar and it was printed by David Altshul.

After Rapaport’s resignation, Shalom Marantz became editor and he was followed shortly afterwards by Tony’s eldest brother Yitzchok, who remained the editor for eighteen years until his death in 1976.  His strong commitment to the Yiddish culture, Zionism and Israel made him an outstanding and respected editor of Di Yiddishe Nayes, prepared as he was to raise controversial political, social and cultural issues.

Yeshiah Taub became the editor for two years from 1976 and then Yasha Sher took over for the next seventeen years until his death in April 1995.  He worked closely with Yiddish printer, Ben Honigman, and other writers and reporters for Di Yiddishe Nayes, such as Shmuel Bennett – whose column Shwartz oif Vais / In Black and White – was very popular, and Moshe Ajzenbud, Hersh Bachrach, Abraham Cykiert, Ben Furmanski, Lew Frydman and Jacob Rosenberg.

When Sam Lipski, a Yiddish speaker and respected and gifted journalist took over as editor in 1987, he continued the paper’s commitment to its Yiddish publication which had such an impact on the community’s intellectual and cultural life.  But with Yasha Sher‘s death in April 1995, and the challenge of a diminished Yiddish audience, a shortage of Yiddish writers and journalists as well as general Yiddish speaking human resources, Di Yiddishe Nayes ceased publication in December 1995.

Aside from the Yiddish press, there have been a number of Yiddish journals published.  In 1931 the Melbourne Gezerd produced The Gezerd Tribune.  It was sixteen pages long and political in character, but only lasted two issues.  In 1937 another journal, Dos Naye Vort / The New Word – which included articles in Yiddish and English, was published by the Gezerd.  This, too, appeared only briefly.

There were the journals Oifboy / Reconstruction, which ran for twenty-six issues from September 1945 until February 1948.  Unzer Gedank / Our Thoughts, was published by the Bund organisation between 1947 and 1974 and still appears in Melbourne to mark significant occasions.  Additionally, the Bund Bulletin, which was published only in 1962, was intended to give information about visiting guests and Bund events.

At the start of 1953, SKIF began publishing its own magazine Chavershaft  / Friendship.  The members and the helfer wrote the material to be printed. Sometimes friends or parents wrote for the magazine, originally edited by Symcha Burstin.  Chavershaft continues today as a quarterly publication. A short lived literary periodical, Der Landsman was supported by all of the Landsmanshaftn for its twenty issues published a few times each year between December 1964 and September 1970, as well as occasionally until 1991.  The Melburner Bleter, the Yiddish section of the Melbourne Chronicle, sponsored by the Kadimah was launched in 1975 and has provided a place of publication for writers and literary critics in both English and Yiddish. The Melburner Bleter has been edited by Moshe Ajzenbud, a short story writer and novelist, since its inception. He first published two special issues in 1953 and 1955 – and has remained the mainstay since the 1975 launch.  The Chronicle and Bleter are now only published to mark special occasions.