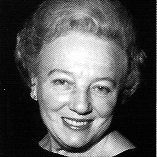 A Yiddish teacher all her life, Genia Wasserman (nee Kac) was born in Bielsk-Podlaski in Poland in 1906 to a middle class, orthodox family.  Her father, Shmuel Kac, was the town’s shochet (ritual slaughterer) and mohel (ritual circumciser).  Genia gained her matriculation in her home town but travelled to Vilna to attend the Yiddish Teachers Seminary where her older brother was already a student.

Prior to the outbreak of war she worked as a teacher in Yiddish schools in Bielsk-Podlaski, Kalisz and Brest-Litovsk. Following the arrest by the Soviets of her husband, Bund leader Heniek Storch, Genia and her daughter were exiled to Kazakhstan in Siberia on 13 April 1940.  They remained there until 1946.  The rest of her family, including her first husband, died in the Holocaust.

In 1946 Genia and her daughter were sent back to Poland.  They remained on the train until it reached its final destination, the city of Szczecin.  Genia immediately rejoined the Bund and began teaching in the Yiddish Peretz School in Szczecin.

In November 1947 Genia and her daughter journeyed to Paris to join members of her late husband’s family.  In Brunoy, a town not far from Paris, a Jewish orphanage was established and Genia was invited to join the staff.  The orphanage provided schooling, accommodation and cultural activities.  It was in Paris that Genia married her second husband, Moishe Wasserman.

The horrors of the Holocaust and the inability to gain permanent residency in France made Genia and her family seek a new home far away from the troubles of Europe.  Together with her new husband, her newly married daughter Helena and her son in law, Genia immigrated to Melbourne Australia, arriving in December 1950.  The family were assisted in obtaining permits by the Rozenberg family, friends from their war years in Russia who had settled in Melbourne earlier. Their passage was paid for by Jewish Welfare.

Genia initially worked in a factory but also gained employment as a Yiddish teacher at the I.L. Peretz Yiddish Sunday School.  In 1952 she was one of the founders of the Sholem Aleichem Kindergarten in Elsternwick.  She was invited to take charge of the kindergarten and worked there both as director and teacher until her retirement in 1975.  She also worked as a teacher in the Sholem Aleichem Sunday School until her retirement, including some years as headmistress.

Throughout her life Genia Wasserman was very involved in and a strong supporter of all aspects of Yiddish life and Yiddish culture:  in education, in the Kadimah and in the Bund.