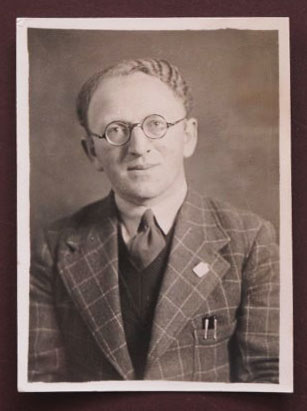 Hirsch Munz (1905-1979) man of letters, research scientist, Yiddishist and business man was the second of six children of Moses Munz, a middleclass traditionalist businessman, and his well-educated wife Miriam, nee Iwanitski. Hirsch was born in Krynki, an industrialised town not far from Bialystok, Lithuania, then part of the Russian empire. He was educated at a Hebrew high school and teacher training college in Lemberg (now Lviv) and became a school teacher before migrating to Australia late in 1927. On arrival in Melbourne he became associated with the Kadimah co-founded by his migration sponsor and relation Alex Lipshut.

He published the pioneering monograph Jews of South Australia (Adelaide 1936) and was a regular contributor to the literary pages of the Sydney Morning Herald, the Melbourne Age, Meanjin and The Bulletin, amongst other publications. He also became the foreign editor of the noted modernist quarterly journal of arts, architecture and letters, Manuscripts, while residing in Adelaide. In 1938 he was a foundation member of the Australian Jewish Historical Society established in Sydney.

Based at Melbourne University from 1940, he continued his scientific research into wool and his literary work in English and Yiddish. With Pinchas Goldhar and Melech Ravitch he co-edited the second Australian Jewish Almanac (1942).  He was responsible for the publication, with his own scholarly introduction, of Goldhar’s Yiddish translation of Eban Saphir, the revealing account of Jewish life in Australia written in 1860 by a visiting rabbinical emissary from Palestine.

Hirsch Munz married Estera Rosenblatt in Melbourne in 1943 while serving in the Australian Navy and returned to live permanently in Melbourne after he was demobilised in 1946, where their only child Martin was born later that year.

During the 1950s, he served as editor of the Yiddish edition of the Australian Jewish News and was a frequent speaker and contributor in Yiddish, Hebrew and English to events and publications under the auspices of the Kadimah, the Labour Zionist movement, the Bialystoker Centre, the Australian Jewish Historical Society and Friends of the Hebrew University, amongst other organisations.

In the early 1960s, he was also the secretary of the committee charged with erecting a monument in Melbourne commemorating victims of the Holocaust. The resulting menorah-shaped monument in the Melbourne General Cemetery, Carlton, was dedicated in May 1963.

In 1965, Hirsch Munz suffered a debilitating stroke which left him severely disabled. Thanks to the skill and dedication of his wife Estera, a physiotherapist, he partly recovered and lived for another 14 years with his mind as lucid as ever.