Music has always been an essential element of Yiddish culture in Melbourne.  The warmth and emotion of Yiddish music is reflected in the personalities who made it live.  Yiddish songs featured prominently at every level of the Yiddish schools’ syllabus and the schools’ choirs had a rich repertoire, a strong and impressive presence at annual school concerts and at communal commemorations and festivals.

The Hazomir Choir performs in concert 1970

At the I.L. Peretz School in the 1930s and 1940s, regular classes concluded at noon on Sundays while the choir and Mr Sharp continued until 1.00pm.  The school choir made many public appearances and in 1943 and 1945 broadcast on radio 3AW.  In 1945 eleven gramophone records were made and these were broadcast on 3XY.  After arriving in 1960, Boruch Kaluszyner taught music and organised the choirs at the I.L. Peretz School and at the Sholem Aleichem Sunday School as well as the Tsukumft choir.  This was an important aspect of the schools and communal life.

Kaluszyner also worked with the Hazomir Choir, enthusiastically arranging music and conducting rehearsals and performances.  It is said that ‘he took the Hazomir Choir on a trip on the wings of a song’ with his passion, his love of music and his warm character.  The Hazomir choir was founded in 1947 as the Jewish Men’s Choir, later forming as a mixed choir.  It was fortunate to procure the services of conductors of European background and training with high musical and artistic standards.  These conductors included Henry Portnoy, Felix Werder, Dolf Brenner, Pinchas Sharp, Jacques Berlinski, Ben Segaloff and Adrian Bartak and, of course Boruch Kaluszyner.

The Yiddish songs were a medium of enormous significance and strength for the Yiddish speaking community and a key to the wider Melbourne Jewish community when they were performed at functions, including the Ghetto commemorations and the Independence Day celebrations.  Hazomir sang at many functions and festivals – in Hebrew, English and Yiddish.  One of its most enjoyable triumphs was at the international Zimriah, the international Choral Festival in Israel in 1979. 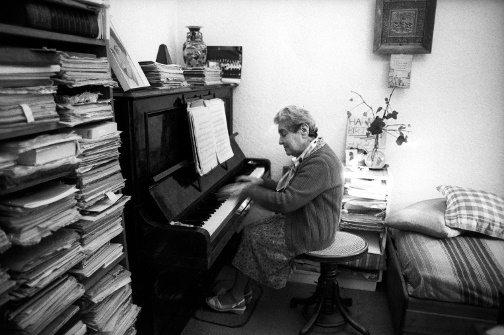 The youth movement SKIF has always maintained a choir for the joy of singing, as well as to make a Yiddish contribution at communal functions.  In 2010, Tomi Kalinski rehearses a group of volunteers who have formed a Yiddish singing choir, just for the fun of it!  They call themselves Mir Kumen On, – We are Coming Along!

Writing about Yiddish music as it was transplanted and developed in Melbourne, would not be complete without mentioning Miriam Rochlin.  On Sunday mornings and Wednesday evenings in the 1950s, Miriam was the music teacher and accompanist of the I.L. Peretz choir. She had a commanding presence:  ‘a short determined lady with a booming bass voice, with which she brought us to order….we feared her, we respected her and we grew to love her.’ (Arnold Zable, Wanderers and Dreamers) Miriam Rochlin was also the accompanist at all communal functions, theatrical events and the Hazomir choir – a known, respected fixture in the Yiddish community until her death in 1994.

Leo Rosner, piano accordionist and doyen of the Jewish simcha circuit, was able to survive the Holocaust because of his musical talent.  He and his brother played for Nazi officer drinking parties in Plaszow and were eventually saved by Oscar Schindler.  In Melbourne, his piano accordion was a familiar sound at communal functions, playing Yiddish music of remembrance and celebration.  Together with Miriam Rochlin, and Freda Wilenski (also an accordionist), Rosner accompanied the David Herman Theatre productions whenever needed.

During the 1970s, Freydi Mrocki, her brother Lionel, together with Lilly Mlynek Kochen and three other teenagers formed the band Flamen to revive Eastern European Yiddish music.  This group was supported by the general revival of folk music  that made their special brand of upbeat Yiddish music acceptable and authentic for young people.

In 1988 the Klezmer Trio was born. Freydi, Lionel and David Krycer played and sang their music at Jewish and non-Jewish festivals, at urban and countryside venues, at folk festivals and community gatherings.  The group developed into the Klezmer Trio plus One, and became Klezmaniain 1997. Klezmania is widely regarded as Australia’s foremost exponents of klezmer music and Yiddish song.  Two other important klezmer bands in the Melbourne music scene are Klezmeritis and Spiel Azoi.

A Klezmer performance at “A Celebration of Yiddish”, an event organised by the Australian Centre for Jewish Civilisation on 16 October 2004

Close-knit friendships developed as Skifistn, SKIF helfer and forsitzer (main leader) endured and motivated the young adults to organise Yiddish occasions, Yiddish happenings, and Yiddish events.  A group of young mothers, including Freydi Mrocki and Lilly Kochen, ran a Yiddish mothers’ playgroup in the 1980s.  While discussing ways to highlight Yiddish music, culture, and language in the community, Bobbi Zylberman told them about a New York City concert organised under the auspices of the Workman’s Circle.  With the support of the Kadimah and SKIF, the first Concert in the Park took place in Caulfield Park on March 20th 1988.  It attracted an audience of thousands from across the Melbourne Jewish community to a celebration of Jewish music and dance and proved to be an excellent vehicle for promoting Yiddish music in particular.  Concert in the Park, renamed In Eyn Kol / In One Voice ran annually, apart from two years, until 2005.

The Melbourne Jewish Spring Festival in 1991 was another in the series of concerts with which the Kadimah was involved.  The main focus of the Spring Festival was the workshops for Yiddish singers, musicians and dancers with Klezmer musician Michael Alpert.

The Yiddish musical production presented by the Yiddish Theatre group at the Kadimah in 1994 was Vu ahin zol ich gein? / Where shall I go?  Beautifully written by Arnold Zable and directed by Charles Slucki, this reflected the immigrants’ experience in Yiddish song and music.  In 1995 the same group staged Mazl Tov Cobbers, as well as Itzik Manger’s, Di Megile, followed by Fiddler on the Roof in 1998. The love of Yiddish music and culture was confirmed by the numbers of people who came to enjoy these warm, joyous and sometimes nostalgic musical events.

In 2010 there are a number of Klezmer spieler (players) in Melbourne, although the most widely known group is still Klezmania.  Sholem Aleichem College has a choir and there are groups of SKIF singers.  Tomi Kalinski rehearses her Yiddish singers, Mir kumen on, and they perform whenever invited.  The most recent musical performance has been the variety concert Chai Society, held in June 2010.  This involved a mixture of younger and older performers and a variety of musical presentations.  In 2010 there remains an appreciative audience for any Yiddish musical in Melbourne.