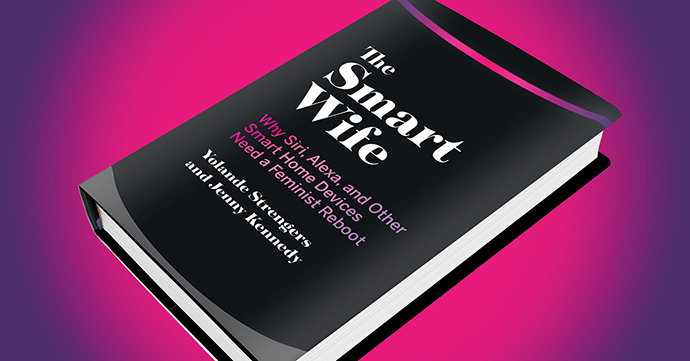 “Many readers may have wondered why their virtual assistants speak in female voices. Strengers and Kennedy document the many ways in which the same old gender stereotypes and inequalities have shaped would-be futuristic technologies—and ask whether a better smart home could be built to address our crises of care.”

In 'The Smart Wife', the authors examine the emergence of digital devices like Siri, Alexa, and Google Home that carry out “wifework”—domestic responsibilities that have traditionally fallen to (human) wives.

They show that the principal prototype for these virtual helpers—designed in male-dominated industries—is the 1950s housewife: white, middle class, heteronormative, and nurturing, with a spick-and-span home. Strengers and Kennedy remind us that the design of gendered devices re-inscribes these outdated and unfounded stereotypes and show that advanced technology is taking us backwards on gender equity.

The Smart Wife offers a Smart Wife “manifesta,” proposing a Smart Wife that would promote a revaluing of femininity in society in all her glorious diversity.

Yolande Strengers is Associate Professor of Digital Technology and Society in the Emerging Technologies Research Lab at Monash University, Melbourne. She is a digital sociologist and human-computer interaction scholar investigating the sustainability and gender effects of digital, emerging and smart technologies. Yolande is author of Smart energy technologies in everyday life (Palgrave MacMillan 2013), Social practices and dynamic non-humans (2018), and over 50 journal articles and conference papers.

Jenny Kennedy is a Postdoctoral Research Fellow in the School of Media and Communication at RMIT University, Melbourne. She is co-author of Digital Domesticity: Media, Materiality, and Home Life, and her current projects focus on digital inclusion of low-income populations, and the gendering of AI and automation in home environments.

Pre-order your copy via Penguin Australia or MIT Press