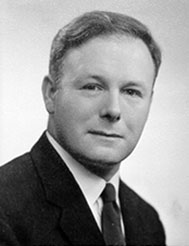 A tribute to Professor Barrie Marmion AO, Monash Foundation Professor of Microbiology from 1963 to 1968, who passed away on 12 July 2014, aged 94 years.

Born in England, Professor Marmion was awarded a medical degree from University College Hospital Medical School London in 1944 and an MD in 1947.

Professor Marmion relocated to Australia and the Walter and Eliza Hall Institute as a Rockefeller Foundation Visiting Fellow in 1951. After a consultant role at the Regional Virus Laboratory PHLS in Leeds, in the UK, Barrie returned to Melbourne to take up an appointment as Foundation Professor of Microbiology at Monash University.

During his time at Monash, Professor Marmion oversaw clinical microbiology teaching for medical students at the Monash Medical School, at the Alfred Hospital in Prahran. Together with Hugh Dudley (Professor of Surgery), Brian Hudson (Professor of Medicine) and Ritchie Nairn (Professor of Pathology), he designed an integrated microbiology curriculum for the first group of undergraduates, which was a radical concept at the time.

After establishing the medical microbiology curriculum, Professor Marmion then recruited staff to teach microbiology to students in the Faculty of Science and to embark on fledgling research programs, which were developed further by his successor Professor Solly Faine.

After leaving Monash, Professor Marmion worked in diverse leadership roles, in Australia and overseas. These included appointments as Robert Irvine Professor of Bacteriology at the University of Edinburgh, in Scotland; Director of Medical Virology at the Institute of Veterinary and Medical Science, in Adelaide; and President of the Australian Society for Microbiology from 1984 to 1986.

Professor Marmion’s contributions to microbiology research had a global impact. He worked on respiratory viruses, Hepatitis B and Q fever, where he developed the world's first and only vaccine to protect Australians against the infectious bacterium Coxiella burnetii,which is transmitted to humans from cattle, sheep and other domesticated animals. Professor Marmion also co-discovered Mycoplasma pneumoniae as the cause of primary atypical pneumonia.

Professor Marmion is survived by his wife Diana, daughter Jane and two grand-daughters.