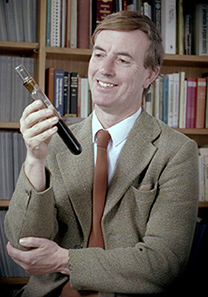 The climb to the Major Mitchell Plateau was rough and steep; the student faltered. Unused to hikes of this length and magnitude, he was doubtful about his ability to cope. Later that night he rubbed his blistered feet, warmed by an inner pride. He had succeeded thanks to the encouragement of his fellow walker, Emeritus Sir John Monash Distinguished Professor William Roy Jackson, AM.

Roy – or “Prof” as he was known to his students – was a person who would always go the extra mile both academically and physically. Whether in the lecture theatre or out roaming the Grampians, his cheerful rallying would spur on others.

Roy was equally at home in the bush as in the lab, and was famed for taking students and colleagues on exciting, challenging hikes. While the rest of the group were ready to drop, he’d be scouring the horizon for the next hill to climb. He continually pushed the limits, even when it came to his walking gear. “He never threw anything out,” recalled Monash research chemist and colleague Eva Campi. “We went skiing once, and his boots were so old the soles were coming away. He couldn’t work out why he kept falling over when he turned the corners and we collapsed laughing.”

On his 50th birthday, Roy arrived at his work to find his office filled with balloons. He cheerfully went about his business entertaining a distinguished visitor from the CSIRO, while wearing the rose-coloured spectacles presented to him by his students, in honour of how he saw the world.

William Roy Jackson was born in the picturesque town of Bacup in the north of England, and attended the local grammar school before heading to Manchester University, where he received a Bachelor of Science with first-class honours in 1955. From there, he attended the University of London, where he received a PhD in organometallic chemistry in 1958. After undertaking a postdoctoral fellowship at Oxford, he headed across the water to Queen’s University, Belfast, becoming an assistant lecturer in chemistry at the relatively young age of 24.

During his time in Northern Ireland he was examiner and chief examiner of the General Certificate of Education (GCE) for seven years. In 1970, he became a Reader in Chemistry at Queen’s, and gained a DSc from the University of London in 1973.

But Belfast was being torn apart by sectarian violence. In that same year, shortly after the Troubles claimed the life of a Queen’s student, Roy headed for Australia with his wife, Heather, whom he had met when they were both students in London, and three children in tow. His appointment was as Chair of Organic Chemistry at Monash, and it marked the start of a long and illustrious relationship with the University.

Immediately, Roy’s enthusiasm for teaching and research was attractive to students and colleagues alike. It led to him being nominated as one of the three “Most Respected Teachers of Chemistry” by the Australian Campus Review Weekly in 1996. Many students were drawn to study with him, and over the course of his career he supervised more than 50 PhD graduates who went on to occupy senior positions in Australian industry and government departments.

As well as being head of the department from 1992-94, Roy was on a host of committees involved in academic promotions and appointments, scholarship allocations and student appeals. From 1978-83 he chaired the Union Board, a job that involved extensive cooperation with students. He was an enthusiastic supporter of promoting the University’s interaction with the general public, and for many years ran highly acclaimed chemical “magic shows” for spellbound children on Open Day.

Roy had a keen musical ear, and played the recorder as well as sang in a choir. His interest in music led to his long-running appointment to the committee responsible for running the Robert Blackwood Hall, and in his role as Chair was instrumental in attracting the Melbourne Symphony Orchestra to resume its concert series at Monash.

In the 1970s, when the concept of applied research was still relatively new, Roy and his colleague Dr Frank Larkins used their combined expertise to investigate how to generate liquid fuels from Victoria’s deposits of brown coal. The research attracted much interest from companies such as British Petroleum and the Japanese Electric Power Research Institute.

Over the course of his career, he developed strong research links with BHP, ICI, AMRAD, Biota and DuPont, to name a few. He was a major partner in grants that brought in more than $20 million and led to international recognition for his contributions to organic chemistry, particularly in the field of organometallic compounds and their involvement in homogeneous catalysis.

In the late 1990s, Roy became interested in trying to make chemistry more sustainable. He co-founded the ARC Special Research Centre in Green Chemistry, and served as foundation director for three years. He strongly believed that clever chemistry was the bedrock for national prosperity. It’s not surprising this translated into laying the foundations for raising awareness of green chemistry among the general public and to secondary school students.

With his Lancashire burr still intact, Roy was in demand as a plenary speaker both at home and abroad. His contribution to the world of science and academia has been recognised by the many accolades and honours bestowed on him, including the Leighton Memorial Medal, the RACI’s premier award that he received in 2002, and a Centenary Medal in 2003. He was a Fellow of the Australian Academy of Applied Science and Engineering, and a Fellow of the Royal Australian Institute of Chemistry, where he was national president in 2000-01 (he was president of the Victorian branch in 1980). He was also a Fellow of the Australian Institute of Energy.

Roy was appointed the inaugural Sir John Monash Distinguished Professor in 1995, and continued working for the University on a part-time basis well into his 80s. In 2013, he was appointed a Member of the Order of Australia (AM) for services to science in the field of organic chemistry as an educator and researcher.

Outside of science, he was a keen and vociferous squash player, as well as an avid bushwalker – a recreation for which he developed a passion during his first holiday with Heather, in England’s Lake District. In recent years he developed a strong interest in the sport of rogaining, and colleagues became used to seeing him bearing the scars of another weekend’s battle with the bush.

As well as his family, Roy was often surrounded by dogs (which, one colleague wryly noticed, were occasionally lacking in training), and in later years his visits to Monash were often accompanied by a four-legged friend.

Professor Jackson’s shoes will be hard to fill.