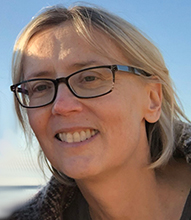 It’s with great sadness that we share the news that our colleague Dr Sandra Cockfield passed away peacefully on Sunday 21 October 2018.

Sandra joined Monash in 1999 as a lecturer in the Department of Management, and became a senior lecturer in 2011.

During her time with Monash, Sandra taught at the Peninsula, Berwick, Caulfield and Clayton campuses.

We extend our sincerest condolences to her family on behalf of everyone at Monash.

“Sandra was an exceptional woman – witty, generous and caring. She leaves us much too young following a battle with cancer,” said the Department of Management’s Professor Greg Bamber.

“She had an extensive knowledge of politics, and was passionate about justice and fairness in her personal and academic life. She leaves behind her a life full of achievements and legacies, and will be greatly missed by family, friends, colleagues and students.”

Sandra was a valued and well-read senior lecturer in the Department of Management. Beginning her Monash career at Peninsula, she later taught at Berwick, Clayton and Caulfield. She moved to Caulfield in 2007, and was a dedicated teacher who specialised in the areas of industrial relations and negotiations.

Sandra was an approachable teacher and friend who saw the positive in people and was inclusive of others. Her research on industrial relations had a particular focus on trade union organisation and strategy, and her thinking was influential both within Australia and internationally.

Her contributions to the field of research and student learning relating to these topics is substantial and significant. She had a passion for understanding and contributing to sustainability, and had also researched and published on sustainable small-scale farming in India.

Sandra was committed to providing service to governments and other organisations. The National Tertiary Education Union (NTEU) awarded her the rare honour of life membership, which recognised her service to workplace relations at Monash and beyond. This included being on the NTEU enterprise bargaining team at Monash for 12 years.

Sandra built an enviable professional reputation and enjoyed being a co-organiser of activities, for example, with two of her professional societies, the Industrial Relations Society, and the Association of Industrial Relations Academics of Australia and New Zealand. She also contributed as co-director of the  Australian Consortium for Research in Employment and Work, Centre for Global Business, Monash Business School.

Sandra’s contribution to these disciplines and organisations will be greatly missed and form part of her legacy.

Edited version of article published in The Insider, 31 October 2018.