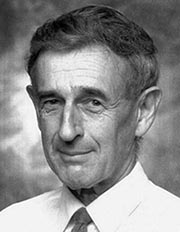 A service will be held this Friday in memory of former Emeritus Professor Bruce Morton, who passed away on September 15 2012.

Professor Morton made the move from Manchester to Australia when he was offered a position as Professor of Applied Mathematics.

He helped start the University's first atmospheric sciences research group, in response to a shortage of research on marine fluid dynamics problems in Australia. The group's focus was on geophysical fluid dynamics in relation to atmospheric motion. Their facilities included a laboratory within the mathematics department, seen as a revolutionary move at the time.

Under his leadership, Monash rapidly became the leading university for atmospheric science programs in Australia.

Professor Morton's reach was far and wide, establishing important early links with the Bureau of Meteorology and the Commonwealth Scientific and Industrial Research Organisation (CSIRO).

He counted Sir Louis Matheson, first Vice-Chancellor at Monash, among his influences, and his research connections enabled him to form collaborations with colleagues worldwide. He himself was a strong influence on his research group at Monash, which included a diverse and well-rounded mix of students, postdoctoral fellows and visiting researchers.

He was known for his dedication to the students in the research group, ensuring that they had excellent supervision and a strong foundation for future work.