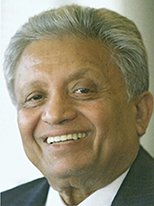 Professor Lord Kumar Bhattacharyya (1940 – 2019), chairman and founder of the Warwick Manufacturing Group (WMG) at our partner university in the United Kingdom, the University of Warwick, passed away on 1 March 2019 after a short illness.

Born in India and educated at the first Indian Institute of Technology in Kharagpur, Lord Bhattacharyya worked at the interface between industry and academic expertise for over 35 years. Throughout his career, he brokered important partnerships and advised industry and governments internationally, including successive UK Prime Ministers and Secretaries of State.

Professor Lord Bhattacharyya was a highly acclaimed global researcher and received many international honours and awards. He was honoured with a CBE in 1997, awarded a knighthood in 2003 for services to higher education and industry and was elevated to the Lords in 2004.

In 2015, Professor Bhattacharyya was awarded China’s first National Rainbow Bridge Award, an annual award given to an expert who has made outstanding contributions to cooperation in the fields of education, science and technology, and culture between China and countries around the world.

“He has helped preserve and create jobs and transform companies, economies, and individual lives...We mourn the passing of a unique man but we also celebrate all that he has achieved and are thankful that those achievements will have a massive impact for years to come.”

Monash University regarded Lord Bhattacharyya as an esteemed colleague and friend, and in 2015 awarded him our highest honour, an Honorary Doctorate of Laws, in acknowledgment of his significant achievements in transforming global manufacturing and collaborating with industry through research and education.

Monash was delighted to welcome Lord Bhattacharyya to Melbourne for the conferral of his Honorary Doctorate, during which he gave a memorable address to Australia’s leading politicians and industrialists. This was a special occasion for everyone who had the opportunity to meet with him and hear him speak.

President and Vice-Chancellor of Monash, Professor Margaret Gardner AO said, “His breadth of vision and energy in its execution was a model for all of us in strategic leadership.”

Monash University extends its deepest sympathies to Lord Bhattacharyya’s family, friends and to the community of the University of Warwick.

Edited version of article published in The Insider, March 8 2019.