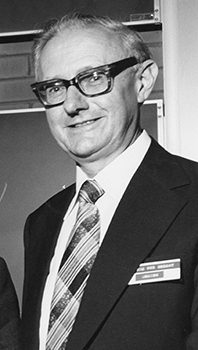 Emeritus Professor Rene Van der Borght was a humble mastermind who captivated his students by hinting at an enticing possibility: the chance to decipher the world.

Rene came to Monash in 1965 as Foundation Professor of Mathematics. On the day of his arrival only two third-year students awaited him for class; by the time he left, 27 years later, the same class had more than 100 students.

Rene played a central role in the development of the applied mathematics programme, combining clarity of thought with a modesty of manner. By infecting the rest of the staff with his philosophy that maths was not only useful but joyful, he attracted numerous students and built up a strong department that remained so for decades to come. Over the course of his career he published more than 45 papers on aggregate systems, relativistic cosmology, and the evolution of massive stars.

As foundation professor Rene was given a big office in the brand-new Monash building. But as a modest man he was uncomfortable with such a sizeable space, asking instead if he could have his secretary’s smaller office. He also rejected his lush padded chair in favour of a green vinyl one.  When asked why, he replied in his thick Flemish accent: ‘Ah ya, ya. I got that chair and it reclines. One day, I sat in it and it tipped over backwards, throwing me to the floor. My head landed on the rubbish bin. I took it as a sign – I shouldn’t be too big for my boots.”

Rene’s legacy was significant. He shaped the mathematics department through both his teaching and administration, and by creating a ripple effect through the countless academics that he inspired. Many of today’s leading researchers were heavily influenced by his innovative teaching.

During his time at Monash, Rene was chair of the mathematics department (1971, 1972 and 1983), director of applied mathematics, and a member of the faculty of science board. He also joined the computer centre committee (1978-1985) and served as chair of the undergraduate matters committee of the science faculty (1981-1984). Throughout his tenure he always remained approachable and encouraging to students, striving to expand their horizons through constant experimenting. “Nothing was an obstacle for him. If you had a vision, he would encourage you and take you on that journey”, recalled one of his past students.

Rene Francois Edouard Van der Borght was born on April 24, 1921 in Malines, Belgium. He studied pure and applied mathematics in the University of Louvain, where he gained a bachelor in mathematical sciences (1945) and a PhD (1950). His postgraduate work was directly supervised by Georges Lemaître, the renowned astronomer who proposed the theory of the expansion of the universe, otherwise known as the ‘Big Bang’. After completing his studies, Rene served as lecturer and chair of mathematics at the Universities of Natal and Indonesia; and as Associate Professor at the Australian National University (ANU).

At ANU, he impressed his peers with the speed at which he mastered the theory of stellar structure and produced significant results in his field. Whilst modelling convection in stars, he would write countless equations and display them in overhead slides, often to the dismay of his non-mathematical audiences. He took great joy in doing so, being a firm believer that ‘astronomers needed a good dose of mathematics.’ His presentations, however, turned out to be anything but dull. Rene often caught students off-guard by comparing orbits to washing machines and spin dryers. He strove to make applied mathematics a relatable subject and thus, proposed equations only as means to understand complex problems. Students and colleagues were immediately disarmed by his humour and charm.

After leaving Monash in 1987, upon which he was appointed Emeritus Professor, Rene moved to Queensland where he lived with his wife Marguerite, who died in 2004. He died on October 8, 2008.