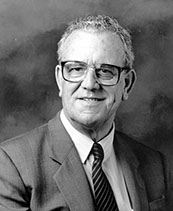 The Monash community is saddened to learn that Mr Jim Leicester, who served as Deputy Registrar from 1976 to 1992, passed away on 20 September 2015, aged 87 years.

James Ronald Leicester was born in Lancashire, England in 1927.  He served 5 years in the British Army, then became an administrator with an education authority in his native county.

In 1959, with his wife Monica and their young family, Jim migrated to South Australia and took up the position of Examinations Officer at the University of Adelaide.

In 1964 he completed his B.Sc. (Economics) as an external student of the University of London.

He was appointed to Monash as its Examinations Officer in December 1965, promoted to Assistant Registrar two years later, and then Deputy Registrar in 1976, a position from which he retired at the end of 1992, aged 65.

One of his many achievements was the establishment and rapid growth of the University’s international students program.  Jim’s trade mark energy and tenacity, and his good humour and innate courtesy, were highly effective in persuading countless overseas students to choose a Monash education over other options on offer.

From 1993 to the end of 2001 Jim Leicester worked tirelessly in a second Monash career, as senior administrator of the international programs office in the Faculty of Business and Economics.

Jim’s integrity and unswerving loyalty to Monash were never in doubt.  He was an astute administrator, blessed with abundant common sense, keen intuition, and the ability to find a way through apparently insoluble problems.   He was unfailingly cheerful and good company, even in times of great difficulty.  Jim Leicester is remembered with respect and affection by past Monash staff with whom he worked.

The University community extends its deepest sympathy to Mr Leicester’s widow Monica (herself a former member of staff), and their family.