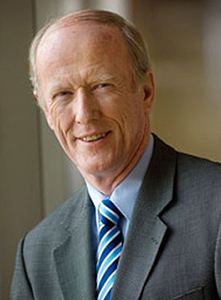 The Monash University community has been saddened to learn of the recent passing of Professor David Healy.

Professor Healy was a distinguished Monash alumnus, graduating with a BMedSci (Hons) in 1971, an MBBS (Hons) in 1973, and a PhD in 1979. Following his clinical training, he was awarded a prestigious NHMRC Applied Health Science Fellowship which he spent at the US National Institute of Health’s Pregnancy Research Branch in Bethesda, Maryland and at the MRC Centre for Reproductive Biology and Royal Infirmary of Edinburgh, Scotland.

On returning to Australia in 1985, Professor Healy was appointed as a consultant obstetrician and gynaecologist at the Queen Victoria Medical Centre and as a specialist with the University’s In-Vitro Fertilisation (IVF) Program, joining the Department of Obstetrics and Gynaecology as a Senior Lecturer with Professor Carl Wood. In 1990 he was awarded a Chair at the University and in 1994 was appointed Chairman of the department.

Professor Healy was the first obstetrician and gynaecologist to be awarded a Welcome Trust Senior Clinical Research Fellowship – an award that he used to extend his research activities in reproductive medicine.

Working with Henry Burger, David de Kretser and Rob McLachlan, among others, Professor Healy led research into antiprogesterones, inhibins in reproduction, relaxin in pregnancy, and the use of GnRH analogues for IVF. This latter work provided the foundations for today’s successful IVF technology and contributed to the University’s world pre-eminence in this field.

In addition to his academic roles, Professor Healy was a visionary clinical leader and an important opinion leader in women’s health, campaigning for women’s reproductive rights, often at personal risk. In 1992 Professor Healy and his colleagues formed the Jean Hailes Foundation – now Jean Hailes – where he remained a Founding Board Member until his death.

The University community extends sincere condolences to Professor Healy’s family and loved ones.