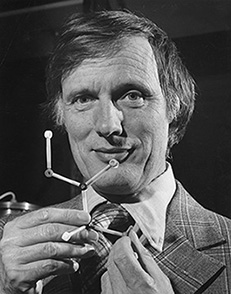 The S3 lecture theatre at the Clayton campus last Wednesday night was silent. It was to have been the venue for the Monash Chemical Society lecture, but sadly the speaker, Emeritus Professor Ronald Drayton Brown AM passed away the previous Sunday 2 November, 2008.

The title of Professor Brown's presentation was to have been 'Farm to Chemistry Department.' It was to be his personal recollections of the development of the chemistry school at Clayton campus, literally from the ground up. Far from being just the content of a lecture, the story of the evolution of the school will last in the memories of those who knew him and the anecdotes of the era will be passed on to student generations to come.

Professor Brown's outstanding academic career began with a PhD from Kings College, London in 1952. In 1959 he was appointed to the Foundation Chair of Chemistry at Monash University where he remained head of the Department until 1992. He also held the title of Director of the Centre for High-Resolution Spectroscopy and Opto-Electronic Technology.

His early work focused on developing theories of chemical reactivity for electron systems and led to the VESCF method still used in molecular mechanics software today.

Professor Brown's additional roles included Chairmanship of the National Committee for Chemistry and of the Committee on Science Policy. He also served as a member of the Sub-Committee on Chemical Education, and of UNESCO's Australian National Advisory Committee's specialist Committee. In 1963 he was President of the Victorian Branch of the RACI. In 1982 he was appointed by the International Astronomical Union to an international panel of consultants to advise on the desirability of creating a new commission on bioastronomy. He subsequently served as a member of the Organising Committee of the commission (1982-1997), serving as President for Commission 51 (Bioastronomy) from 1991 - 1993. He also served in various capacities for the International Union of Pure and Applied Chemistry between 1987 and 1997.

Dean of the Faculty of Science Professor Rob Norris said Professor Brown's commitment to higher education and his vision for the School of Chemistry was inspirational.

"Ron Brown's legacy will continue to evolve. It's benefits and educational value will live on in the experiences of every student. Ron's dedication to both research and student success should serve as a guiding light to staff and students. Ron always had passion for science and this propelled him on a life journey filled with scientific and educational endeavours and achievements," Professor Norris said.

As a founding father of the early establishment days of the Clayton campus, Professor Brown earned a significant place in the University's history. Earlier this year, Professor Brown was among the recipients of the 50th Anniversary Research Awards.

Vice-Chancellor Professor Richard Larkins said Professor Brown will forever be remembered as integral to the establishment of one of the finest chemistry schools in Australia.

"Ron Brown continued to be a part of Monash, maintaining research interests in collaboration with Dr. Peter Godfrey, generously providing his expertise, knowledge, mentoring and time to ensure the school continued to thrive," Professor Larkins said.