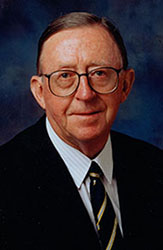 David William (Bill) Rogers was a man who straddled the worlds of business and academia with considerable aplomb.

These twin pillars, alongside his work as a lawyer, buttressed a life that was lived to the full on both a public and a private level. His portrait, hanging in the Robert Blackwood Hall at Monash, commemorates his work as chancellor, while out at sea, a state-of-the-art industrial tanker bearing his name shunts liquefied natural gas – testament to his years at the helm of Woodside Petroleum.

Born in Sydney in 1926, the son of Brigadier John David Rogers and Irene Myrtle Lowe, Bill in many ways followed in his father’s sizeable footsteps, treading a path every bit as illustrious.

He studied at Malvern Grammar School before becoming a boarder at Geelong College from 1940 to 1943, where he was an all-round achiever (his father, also a former collegian, had set a worthy precedent).  Notably sporty, he became the boys’ open tennis champion, and in his final year was the school’s football captain, school prefect and house captain, as well as a member of the tennis and music committees.

Bill also embraced the arts, taking on the role of naive lover Yum-Yum in The Mikado; the strolling jester Jack Point in Yeoman of the Guard; and the comical Duke of Plaza Toro in The Gondoliers.

In 1944, aged 18, he enlisted in the war effort and served as a signalman with the Central Bureau Intelligence Corps in New Guinea and the Philippines. While there, he set up a newspaper for Australian troops. After being discharged 18 months later, he entered the University of Melbourne to study law. This marked the start of his long relationship with Ormond College, which had also been a sizeable, formative part of his father’s life.

His distinguished associations with business began a decade before that when he was appointed to the local board of the Australian Mutual Provident Society (AMP). Over the years, Bill held a number of directorships, including the Broken Hill Proprietary Company Limited (BHP), Costain Ltd and Gatic Australia.  He was chairman of Denso (Australia) Proprietary Ltd and Woodside Petroleum (1986-1999), where he’s regarded as one of the company’s pioneers, responsible for bolstering the organisation into Australia’s largest oil and gas producer.

During his time at Woodside, the company entered the liquefied natural gas (LNG) export business, which meant buying or chartering special LNG vessels.  One such ship, the Northwest Snipe, was launched in 1990 at its Japanese shipyard and attended by Bill and his wife, Jan (who had the official task of naming it).

It was Bill’s role, however, that proved memorable. He was determined to present, as a gift, a ceremonial sword that had been surrendered by a Japanese soldier at the end of World War II and acquired by his father as a souvenir. Naturally, there were reservations among Woodside staff as to how such a gift would be received. Thankfully, it was accepted with pleasure and placed on prominent display. Despite its heritage, Bill preferred to think of it as a symbolic “sword of peace” going backwards and forwards between Japan and Australia.

In 2013, the new 9000-tonne carrier, Woodside Rogers – named in his honour – slid into the waters at a shipyard near Busan, South Korea. A handsome crimson in colour, its name is emblazoned in large white letters along the side, complete with kangaroo motifs.

In 1992, Bill became the fifth chancellor of Monash University. In an interview, he described how the University’s then vice-chancellor, Mal Logan, asked him to consider the role, saying “take as much time as you like”.  The next day he was back on the phone eagerly asking, “Have you made up your mind?”. Bill took the job, jokingly telling a journalist who asked him why he thought he had been appointed: “Well, I may be able to pass on some of the bad lessons I’ve learned in the commercial world.” One of those lessons, he observed, was the importance of having the “right car”.

His contact with the University began much earlier than that, however, when as a lawyer he served a writ on the student revolutionary Albert Langer when he and his cohorts occupied the administration building (an event he described as “hair-raising’’). After the sedate and ordered world of business, the initial council meetings were something of an eye-opener. While company gatherings generally followed agendas, council meetings were considerably unpredictable, he discovered, owing to the cacophonous presence of many “interesting and opinionated people’’. Running a meeting was, he said in a moment of reminiscence, “a bit like herding cats. They were all over the place.”

Bill saw his role as much more than “getting dressed in coloured robes for graduations”.  Managing the council he felt was akin to running a modified court of appeal, and his focus was on “trying to do the right thing”.  At the time, the University was undergoing a series of mergers and changes in structure. “We came to the very edge of solving some rather difficult problems,” was how he diplomatically described it.  Saying that, he never regretted taking the job. He greatly enjoyed officiating at graduation ceremonies, describing them with laconic humour as “one of the few useful things we had to do!”.

Throughout his life, Bill kept strong ties with his alma mater. A member of the Ormond College Council, he became chair at a time when the college master was under investigation following complaints of sexual harassment by two female students in the early 1990s. (The Ormond controversy, as it was known, became the subject of the writer Helen Garner’s book The First Stone.)

In 1998, he was appointed an Officer of the Order of Australia (AO) for services to tertiary education and to the gas and petroleum industry, and a year later he was awarded an Honorary Doctorate of Laws from Monash.

Bill also retained strong community links, and was an enthusiastic supporter of many health and welfare organisations. And he never lost his theatrical streak, taking the lead role as narrator at a Geelong College Glee Club reunion fundraiser.

In 1986, Bill and his brother Allan set up a scholarship fund to commemorate their father, which assists students in financial need to attend Ormond College. In 2013, he set up one to commemorate his mother who, 98 years earlier, had been the first female student to study at Dookie Agricultural College, based in the Goulburn Valley. He hoped the scholarship would honour her historic role, and at the same time create a future cohort of female agricultural leaders.

As chancellor, Bill once remarked that he took heed of the words of Aesop when he said: “Fools take to themselves the respect that is given to their office.” While enjoying the pageantry of his role, he was careful never to lose sight of his obligations to humanity.

Edited version of article published in The Insider, September 19, 2019.