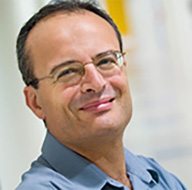 The recent death of Professor Leone Spiccia after a long fight with cancer has robbed the School of Chemistry and Monash University of one of its most distinguished scholars. Leone was born in Sicily in 1957 and came to  Australia at primary-school age. He had to learn English from scratch, and overcome much prejudice in his early days in his new country.

He graduated with a BSc (Hons) and gained a PhD from the University of Western Australia. He worked on Postdoctoral Fellowships at the Universities of Calgary, Neuchatel, and the ANU before being appointed to a Lectureship in Chemistry at Monash in 1987. Leone rose rapidly to Senior Lecturer (1994),  Reader (1999) and then Professor in 2006. He was also Deputy Head of Chemistry 2003-2006, and Deputy Dean 2006-2008 (ADR 2006/7).

Leone held Visiting Professorships at the University of Heidelberg, Germany and the Ecole Polytechnique Federale de Lausanne, Switzerland, and was recently a specially appointed Professor in the Catalysis Research Centre at Hokkaido University, in Japan.

His awards include, the Burrows Award of the Inorganic Division of the RACI, a Discovery Outstanding Researcher Award (DORA) of the ARC, a Helmholtz International Fellowship, an Alexander von Humboldt Senior Research Fellowship, and the H.G. Smith Medal of the RACI.

Leone was outstandingly successful with grant applications with numerous ARC awards, and grants from the European Commission, the Australian Synchrotron, the Helmholtz-Zentrum Dresden-Rossendorf, the World Laboratory, and many more. From these major efforts some 300 papers and patents emerged and over 50 PhD students were supervised to completion.

His research interests were built on a firm basis of physical and mechanistic inorganic chemistry, and extended into biomimicry, solar energy conversion and water-splitting, therapeutics and bio-sensors. Through collaboration his interests extended into materials science and engineering, medicine, environmental  science, earth science and physics.

Above all, Leone was a terrific colleague, helpful to all, a willing collaborator, and a true gentleman. He will be widely missed. His children, Nadia and Nicolas, are both graduates of Monash and the School of Chemistry.