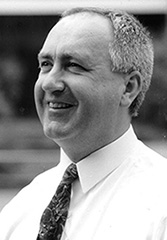 Joe Curtis, who passed away on 11 July 2003, served Monash University for nearly 20 years.

He began as the catering manager of Monash University Union, but from 1993 he carried a succession of titles (Warden of the Union, CEO of Monash Unicomm), which indicated his responsibility for a great many campus services.

These included the Careers and Employment Service; Catering; the provision of student and commercial facilities in the Campus Centre; the ongoing refurbishment of the building itself; and the enhancement, in a variety of ways, of the university's public image.

The union, when he inherited it, was anything but united. Student factions fought and disparaged each other and the union administration. Joe handled the politics with skill, patience and, above all, generosity. He eventually managed to depoliticise the union board.

His vocation for hospitality and his personal warmth coloured his working style. He practised 'management by walking around'. He displayed a fatherly concern for his staff and saw himself as the host of everyone who used the Campus Centre. He established strong personal relationships with other key people in the university.

He had a strong commitment to the university's image and reputation, and to the welfare of the university community. Joe was saddened towards the end of his career when it became clear that he would not be able to contribute to the university's future initiatives in a way that his knowledge and endeavour would normally guarantee.

After the onset of prostate cancer in mid-2002, Joe's work schedule was punctuated by visits to doctors and hospitals. When asked, he provided objective reports of his condition in tones so calm that his friends remained optimistic. When he took sick leave late in 2002, it was "temporary".

He was a big-hearted man, and nearly all those who knew him consider themselves the better for the connection.