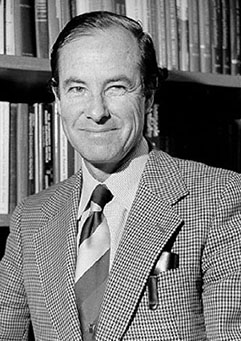 At Monash, Bruce built a centre of excellence in Inorganic Chemistry second to none in the Southern hemisphere ignited by a fire that had burned since childhood.

Back in 1940, a 12-year-old Bruce watched in wonder as a visiting trainee teacher at his Adelaide school carried out an experiment using Condy’s crystals. It was, he later recalled, like watching water being turned into wine. At home he tried to replicate it using his mother’s store of potassium permanganate crystals. His experiment failed but it set him on a path to become one of the greatest Australian chemists of his generation.

Bruce came to Monash in 1964 as Professor of Inorganic Chemistry, where he remained for the next three decades. At the time the department was still in its formative years with fewer than 10 academic staff members. He immediately began the task of establishing an inorganic group, which thrived under his thoughtful and creative leadership. His enthusiasm for scholarship and his appetite for new chemical adventures embraced both his teaching and his research, which was characterised by inventiveness and persistence.

His research groups made major advances, particularly in the fields of Schiff Base complex chemistry, of which he was a world pioneer, and in the more market-oriented areas of sol-gel technology and metal organic chemical vapour deposition. His work on perfluoroalkyl-organometallic chemistry in the 1955-1980 period was years ahead of its time, coming to later fruition by German chemists in the 1990s. Likewise his work on polyphosphane and polyarsane chemistry was ground breaking at the time. He also pioneered Monash’s entry into materials chemistry. Bruce and his Monash colleagues were among the first to join in research collaborations with industrial partners and tackle commercially oriented projects. His group was awarded a number of Commonwealth funded programs in collaboration with Telstra Research Laboratories and BHP involving the synthesis of new organometallic compounds for the preparation of semi-conductors. A further special collaboration commenced in 1989 involving the start-up company then known as Silicon Technologies Australia P/L.

As well as a scientist, Bruce was highly regarded for his personal qualities, which included his strong but fair leadership, his thoroughness and attention to detail, his preparedness to tackle less pleasant tasks and his love of the collegiate style of management. He was known for leading with integrity and intellectual distinction. He was an effective mentor, as two former students and two junior appointees rose to Professorial status at Monash. Others gained prominence in industry with one becoming Technical and then General Manager of IDT.

Bruce Oswald West was born in January, 1928, in Adelaide, South Australia. After his early experiment with potassium permanganate, he rushed out and bought a chemistry set and a few textbooks. His parents’ gardening shed became his personal laboratory. His passion led to him studying science at the University of Adelaide, where he graduated B.Sc. in 1949 with first class honours in Physical and Inorganic Chemistry. He started working as a lecturer in the university that same year, due to an unexpected vacancy arising. Despite his lack of teaching experience, his appointment was made permanent a year later.

By this time, he had developed a strong interest in the use of radioactive elements as ‘tracers’. He decided to undertake a PhD, but the problem was that nobody in Adelaide knew enough about the subject matter to supervise his research. So, he supervised it himself. His first published paper on exchange reactions with cobalt compounds using radioactive cobalt as a tracer appeared in the renowned journal Nature (1950). He was awarded a PhD by the University of Adelaide in 1953.

Bruce realised that if he was to make a career in academia he would have to supervise postgraduate students. Since he did not have the experience of being supervised by a knowledgeable person, he undertook a second PhD, courtesy of a Rhondda Open Research Scholarship at Gonville and Caius College, Cambridge (1953 -1955), returning to the University of Adelaide in 1956. He was promoted to senior lecturer (1957) and reader in physical and inorganic chemistry (1962).

In addition to his contributions at Monash, Bruce was elected President of the Royal Australian Chemical Institute (RACI) in 1973, following a period as President of the Victorian Branch of the Institute in 1971. He also played important roles as Chair of the RACI Division of Coordination and Organometallic Chemistry (1970), and as Chair of the Australian Representatives of the Royal Society of Chemistry (1966-1993).

Bruce was awarded the RACI’s Burrows Inorganic Chemistry Award (1981) and RACI’s Leighton Memorial Medal (1992); the institution’s most prestigious award. In 1994, upon retiring from Monash, he was appointed Emeritus Professor. It was a fitting tribute for a man hailed as one of the “true gentlemen” of chemistry.

The University offers its deepest condolences to Bruce’s wife, Alison, his sons and their families.

Edited version of article published in The Insider, October 22 2020.