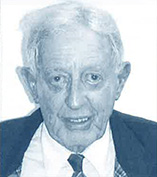 Born in Western Australia, sixth in a family of eight, Keith Frearson was the son of a country store keeper. He enlisted in World War II serving with the RAAF, as a navigator in Lancasters – he was awarded the DFC.

After the war he went to the University of WA, then to Cambridge University (Clare College) where he studied economics and came under the influence of Professor Joan Robinson. He developed theories of economic growth in the Keynes-Robinson model.

He became a lecturer at the University of Melbourne in the Commerce faculty and then when Don Cochrane was appointed foundation dean of the Faculty of Economics and Politics at Monash, Keith Frearson was one of his first appointments. He commenced as a foundation member of staff handling economics statistics. Monash became his life. He lived at Mannix college, and even after retirement retained an office in the faculty and continued to do some teaching and advise students.

A brilliant teacher, he had the ability to convey the essence of economic or statistical concepts in an entertaining style. He cared deeply for his students, taking an interest in their broader education and development, often offering critical comments as well as advice. He was also well known among economics teachers. He not only had taught most of them, but was also chief examiner for school economics for many years and would regularly give lectures to school students, and help teachers.

When he formally retired from Monash, economics teachers gave him a special farewell dinner. Dress for that occasion was “football socks” as he only ever wore football socks. Even when acting dean of the faculty at Monash, he was noted in the press for wearing a dinner suit with highly visible red and white football socks.

A man with a ready wit and sense of fun, he lived life to the full, and many are the stories told of his repartee, his antics and often outrageous behaviour. The Notting Hill Pub became his second home. He became one of the most well-known figures at Monash University and generations of students benefited from his teaching and enjoyed his humour. He even conducted extra tutorials for footballers to help get them through.

A keen football fan for many years, he was South Melbourne Football Club No 1 ticket holder, taking a keen interest in the club and its players. After the switch of South Melbourne to Sydney, he concentrated his football efforts on Monash – and so blue and white socks now took over.

While at Monash he was one of the founders of the Monash Football Club (1961), serving as its president many times, and for years attended to much of the routine hard grind – getting dressing rooms ready, attending to drinks and bandages for players, always having soft drinks and lollies for them, attending to the umpires and making sure the Association requirements were met. He was active with the club until his death. He was also a strong supporter of the Sports Union.

A large funeral was held at the Monash Religious Centre on 8 February 2000, at which a packed service heard readings from Sister Monica SGS from Mannix College, Adrian Barker (Football Club), Professor Lachlan McGregor (a close friend from Economics department days) and Eileen Lane, his sister who came from Perth. Reflections on his life were given by his brother Don Frearson, the former dean of Faculty of Economics and Politics Professor W. Angus Sinclair, and from the Monash Football Club – Dr Peter Longley, who was an early captain, and Brian Ford, a former coach.

After the service a celebration was held on the Main Oval. The large crowd included former Monash staff, many ex-students, footballers from the old South Melbourne and generations of Monash players, current people from the football club and the VAFA, business leaders, economics teachers and family and friends.

A man of remarkable generosity, he did not believe in possessions for himself, and was always giving away his money to needy students (“short term liquidity deficit”), to footballers, to the football club and at one stage gave the Monash Sports Union a much needed trailer. An inspiring personality, he was a much loved figure and Monash legend. He will be greatly missed.