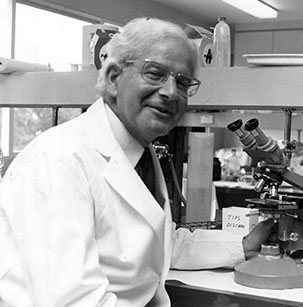 Emeritus Professor Solly Faine, who has died aged 94 years, was an early Monash pioneer and professor of microbiology whose work on leptospirosis – a potentially fatal disease spread through the urine of infected animals  – was  internationally renowned.

Solly came to Monash in 1968 as Chair of the Department of Microbiology where he established the leptospirosis research group.  This was not always an easy task;  the University was still being built around him and oversights such as the lack of air-conditioning meant that on very hot days he would lose strains of cultures. Ongoing bureaucracy and funding battles ate into his work time, and yet despite this, the department became an indisputable success, evolving rapidly and producing many leading academics and researchers, some of whom later became directors of major diagnostic services. His effort, perseverance and personal research imprinted Monash with a significant scientific and professional status among Australian universities.

Solly was known as a strict professor, satisfied with nothing short of excellence. A firm believer in the view of Monash’s founding Vice-Chancellor, Sir Louis Matheson, that ‘a good vacancy is better than a bad appointment’, he always selected the best staff available and constantly demanded the highest standards of his students and colleagues.

He also had a sense of humour.  Once, at a meeting, when a professor known for his loud voice and abrasive manner thumped the table heavily and proclaimed dramatically “Vice-Chancellor, this is a very difficult decision, we need the wisdom of a Solomon and let’s face it, there’s not one among us,” Solly put up his hand and called out “yes there is, I’m here”.

Faine’s research focused on the bacteriology of leptospires and in the pathogenesis, diagnosis, epidemiology and control of leptospirosis, which poses a threat to farmers, mine and sewer workers, veterinarians and animal caretakers – many of the occupations that represent key pillars of the Australian economy. His work shone light onto an area of study that tended to generalize its findings from only one species, leading to misdiagnosis and less than optimal treatment. He also published research studies of antibiotics, sterilization and hospital infection.

Solomon Faine was born on August 17, 1926, in Wellington, New Zealand, to parents John and Luba (nee Ketko).  He attended Rongotai College and graduated in medicine from Otago University, New Zealand in 1949. Afterwards he worked as an assistant lecturer in bacteriology before carrying out post-graduate studies at the Sir William Dunn School of Pathology, Oxford University (1953-1955) on a Nuffield Dominions Trust Fellowship.

On returning to the southern hemisphere, Solly worked as a lecturer in bacteriology at Otago University and the University of Sydney where he was Associate Professor of Clinical Bacteriology, before joining Monash.  Over the course of his long and distinguished career, he served as member and chair of several professional and scientific committees, including the Australian Society for Microbiology, the Royal College of Pathologists of Australasia (where from 1974-78 he was chief examiner in microbiology), the International Union of Microbiology Societies and the International Committee on Systematic Bacteriology. He also served as consultant and advisor for the World Health Organization (WHO) on communicable diseases and participated in several WHO committees and consultations on zoonotic diseases. In 1972, he joined the French non-profit foundation, the Pasteur Institute, as a French-Australian Exchange Scientist. This was followed in 1978 by his appointment as an American-Australian Association (Fulbright) Senior Fellow.

Solly was associate editor of the journal Pathology and author of many papers and articles which appeared in journals, textbooks and reference volumes. His most renowned work was the book, Leptospira and Leptospirosis (1994). Not surprisingly given his credentials, he was an invited lecturer at national and international conferences and universities and research institutions in the USA, China, Japan, Thailand, South Korea, France, Germany, The Netherlands, Argentina and Barbados. In 2000, he served as the Marco Longo lecturer of the Society of Tropical Medicine and Hygiene. At various times he was chair or member of the International Union of Microbiology Societies’ Division of Bacteriology as well as a long-serving member of the International Committee on Systematic Bacteriology and its taxonomic subcommittee on leptospira.

Despite facing what he saw as bureaucratic challenges and constant resistance to change within the University, Solly remained head of microbiology for almost 21 years. As a man of duty, he made sure to remain informed of the happenings of the University. Even though he believed that committee meetings absorbed and eroded the time of professors, he still attended them religiously throughout the years to prevent decisions adversely affecting the department he had passionately helped construct.

After retiring from Monash in 1991, upon which he was appointed Emeritus Professor, Solly worked as consultant and principal of Melbourne-based MediSci Consulting and Writing (1991-2005). In later years he looked back with great pride at his time as head of the department. “It was a special privilege and responsibility to have been able to steer the vital years of development from 1968 to 1991 that defined the shape and character of microbiology and ensured its academic and professional recognition and survival” he revealed in his reminiscences. “Whatever I have done has been what I thought my job and responsibility required. I have tried to do that as well as I could.”

Solly married Eva Rothschild in 1950, with whom he had two daughters, Miriam and Susan and a son, former radio presenter and media personality, Jon (Jonathan) Faine AM.

Edited version of article published in The Insider, February 18 2021.