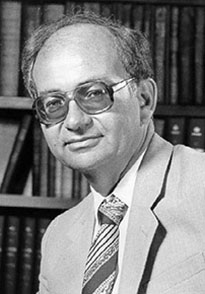 In 1960 a young law student was driving down Parramatta Road in Sydney, when his car hit a patch of damp, greasy malt which had fallen off the back of a brewery wagon.  The car overturned and the driver was flung into the rear seat as the vehicle skated across the road. Witnesses agreed that he was lucky not to have been killed.

The driver’s name was Bob Baxt and luck would continue to shine down on him for decades to come.  He went on to establish a stellar career which sat at the apex of public, private and academic arenas, making enormous contributions to each.

Bob, who died on March 11 2018 aged 79, was dean of law at Monash for eight years. He was a visionary, combining high academic achievement with considerable business nous. His area of expertise was commercial law and he was, according to a colleague, a “thought leader’’ long before the term became fashionable.

Bob worked energetically to build bridges to business and the legal profession. Like a king leading the charge of an army, he waged war with old school conservative beliefs as to what a modern law faculty should look like. This occasionally caused clashes with some of his more purist colleagues. His passion and verve for promoting Monash and pushing it to the forefront was sometimes seen as aggressive, of which he was aware. Nevertheless, he is still regarded by many as one of the most dynamic and innovative deans in the faculty’s history.

Robert Baxt was born in Shanghai in 1938. His parents, Samuel, a hairdresser, and Hava (nee Zatz) were Russian Jews who had fled to China following the Revolution in 1917.  After surviving Japanese occupation the family came to Australia in 1947, settling in Sydney.  From early on, Bob showed great intellectual promise and was dux of Newington College in 1955 where he enjoyed participating in debates.

Bob undertook a Bachelor of Arts (coming second in the state for ancient history) and then studied law at Sydney University, graduating in 1963. Among Bob’s fellow articled clerks was John Winston Howard, the future prime minister, whom he recalled as being only an “average student.”

That same year, Bob won a scholarship to Harvard to undertake an LLM. It was here he became interested in competition law, which, at the time, was not an established entity in Australia.  On returning to Sydney, he worked at Freehill Hollingdale and Page. However, he found his letters of advice to clients were getting increasingly longer due to a desire to earnestly consider the theoretical points of the issue he was working on, and took this as his cue to move to academia.

Bob initially lectured in industrial and commercial law in the department of accounting at Sydney University before joining Monash as a senior lecturer in 1968 where he “terrified” students with his Socratic method of teaching from his days at Harvard. “You knew you had to be prepared for his classes,” one former student half-jokingly recalled. And yet, beneath his bluff exterior, beat a gentle heart. Bob was the champion of the underdog, a fierce mentor and supporter of students. He never let the gravitas of his academic standing become a barrier.

Bob taught almost every commercially-oriented subject. With a handful of others, he set up the highly-successful multidisciplinary course in competition law, which became one of the engines for the reform of Australia’s outdated competition laws.  A prolific writer, he initiated the Australian Business Law Review as well as the Monash University Law Review, where he was the inaugural editor.  While working at a frenetic pace, he also read for the bar and worked one day a week as a consultant for Phillips Fox and later Arnold Bloch Leibler.

Bob’s rise within the law faculty was rapid. He was soon promoted to associate professor and became the Sir John Latham chair of law in 1972.  Dynamic, innovative and energetic, he was an endless source of new projects and ideas. An appointment as acting dean was swiftly followed by becoming dean of the faculty in 1980.

While commercial law became the vanguard of his ambition to place Monash as a leading law school internationally, one of the strongest features of his deanship - and one of which he was most proud - was the establishment of the formal research structure within the law faculty which included ‘research trimesters’ to give staff more opportunity to study overseas, and the appointment of the first director of research.

He was conscious of the need to develop and maintain close links with the legal profession and did so in a variety of ways, notably setting up the faculty’s Centre for Commercial Law in 1985. He also established close relations and exchange programs with a number of law schools, in particular in Canada and the US.

Bob’s expertise in competition law led to his appointment as the chair of the Trade Practices Commission in 1988 (which later became the Australian Competition and Consumer Commission) where he waged war on monopolies and fought to augment the commission’s powers.

Transparency and accountability were the hallmarks of his administration. Under his forthright leadership the Commission won a landmark High Court ruling in what became known as the Queensland Wire case. (As a result, the ACCC now has a right to intervene in any private legal proceeding when an issue of public importance is at stake). In 1991, at the end of his three-year term at the Commission, he stepped down and became a partner of the Melbourne law firm Arthur Robinson and Hedderwicks (later Allens Arthur Robinson).

Bob was chair of the business law section of the Law Council of Australia, its trade practices and corporations’ law committees, as well as a long-serving chair of the law committee of the Australian Institute of Company Directors, and adviser to federal and state governments and bodies. He was awarded the Order of Australia (AO) in 2003 for services to the law and was the recipient of a Centenary Medal.

From 2011, he was an Emeritus partner at Herbert Smith Freehills. Such was his love of the law and his thirst for academic rigour that he continued to work from his hospital bed, right up until a few weeks before the end of his life.  He was awarded an honorary doctorate (LLD) by Monash on March 8, 2018.

Bob married Ruth Adler in 1961 and the couple have two daughters, Miriam and Simone. An able raconteur with a fine sense of humour, he and his wife were known to be delightful hosts. They were both keen patrons of the arts whilst Bob retained a life-long love of cricket - in 1961 he was a signatory on a letter to the Sydney Morning Herald expressing outrage on the omission of cricketer Johnny Martin from a tour of England.

That same year, Monash took its first students. Meanwhile in Sydney, the future dean of law was back behind the wheel and raring to go.

Extended version of tribute published in The Insider, 15 March 2018.