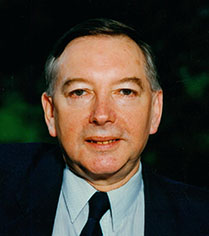 Lauchlan came to Monash in 1993 as pro vice-chancellor (Gippsland). From 1995 to 1996, he was also deputy vice-chancellor. As director of the then new Berwick campus, he promoted double award programs in which students studied concurrently for degrees and diplomas. He oversaw responsibility for open learning, distance education, libraries, computing and multimedia, believing that regional university campuses should be beacons in the region’s development.

John Lauchlan Carter Chipman was born on 12 September, 1940, in Essendon, Melbourne. He was the only child of Harold Carter Chipman and Florence May Chipman (née Burness).

During his time at Oxford, he became friends with Michael Palin, who went on to become a member of iconic British comedy group Monty Python. The pair shared accommodation, and Lauchlan is variously cited as the inspiration for the group’s ‘Bruces’ skit, about the members of a philosophy department at the fictional Australian University of Woolloomooloo, who are all named Bruce.

Lauchlan returned to Melbourne to study law and became a senior lecturer in philosophy at his alma mater. During this time, he completed both his Oxford Doctor of Philosophy (1972) and his Melbourne LLB (1973). In 1975, he moved to the University of Wollongong as foundation professor of philosophy, and later became its first pro vice-chancellor.

Early in his academic career he concentrated on the philosophy of language, but later gravitated towards political and moral philosophy, philosophical logic, and the jurisprudential areas of human rights and the relationship between law and ethics. He was also pivotal in the creation of the libertarian think tank, The Centre for Independent Studies. A Christian libertarian, he was conservative, right-wing and sometimes controversial in his views.

After leaving Monash, he was subsequently appointed vice-chancellor and president of Central Queensland University (1996-2001). He retired to the Gold Coast, where he joined Bond University as an ombudsman and, later, a lecturer.

Lauchlan was married for 10 years to ABC broadcaster Robyn Slater, from 1983 to 1993. They remained lifelong friends until her death in 2004.

Edited version of article published in The Insider, May 16 2019.