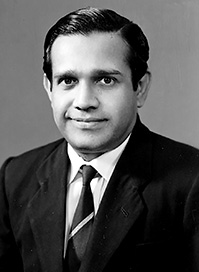 Members of the Monash community, and especially our colleagues in the Faculty of Law, were deeply saddened to learn of the passing of Judge Christopher Gregory Weeramantry. He died on 5 January 2017 in Colombo, Sri Lanka, aged 90 years.

Judge Weeramantry held the Sir Hayden Starke Chair of Law in the Monash Law School from 1972 to 1991, when he was appointed a Judge of the International Court of Justice in The Hague. He retired from that Court as its Vice-President in 2000.

Monash conferred on Judge Weeramantry the title of Emeritus Professor in 1991. His many other honours and awards included appointment as an honorary Member of the Order of Australia (AM) in 2003, and recipient of the UNESCO Peace Education Prize in 2006.

A man of broad legal scholarship, his teaching interests spanned contract law, international law and jurisprudence, and he published extensively.

During his 20 years of distinguished professorial service to Monash Judge Weeramantry was regarded as a most congenial colleague. He maintained a keen interest in the Law Faculty, its welfare and progress, to the end of his long life. Plans are being finalised by the Faculty to create a student prize honouring Judge Weeramantry for presentation at its annual prize ceremony.

Judge Weeramantry’s funeral was held in Colombo on 8 January. His family has advised the University that a memorial service will be held at 2pm on Saturday, 18 March at St Christopher’s Catholic Church, 5 Doon Avenue, Syndal.

All of Judge Weeramantry’s Melbourne-based friends and admirers are warmly invited to attend.