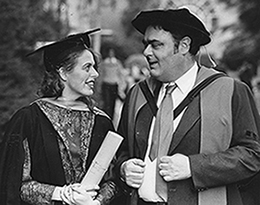 Professor Ron Keightley, a valued former staff member of the Faculty of Arts, died in July 2006 after a long battle with cancer.

Professor Keightley, pictured at daughter Anamaria's graduation in 1983, arrived at Monash in March 1972 from the University of Nottingham to take up the inaugural Chair of Spanish. He retired in January 1992 after 20 years of dedicated teaching and research.

Former colleague Dr Alun Kenwood said the university had benefited enormously from the depth and breadth of Professor Keightley's experience.

"Thanks to his wide range of scholarly interests and expertise, his great enthusiasm and a commitment to teaching that far exceeded the professorial norm, Ron raised the Spanish department to another level," Dr Kenwood said. "It was able to offer courses that ranged from medieval to modern Spanish literature, from the culture and literature of Latin America to Spanish linguistics.

"Ron's course of literary criticism, with its detailed analysis of extracts from early Spanish poetry and prose to modern times, was a model of academic scholarship and inspired some of his students to undertake further study and seek excellence in their own work.

"Honours and research supervision brought out Ron's very best qualities -- his erudition, his encyclopaedic knowledge, his attention to detail and his careful nurturing of talent. It was these qualities that attracted to Monash research students and a number of young academics from other universities."

Music was another of Professor Keightley's great passions. He contributed vigorously to the cultural and musical life of both the university and the wider community through his participation in the Monash Chapel Singers, the Wednesday Consort Group, the Early Music Society and the choir of Christ Church, South Yarra. He had a fine voice and enlivened some of his tutorials with spontaneous rendering of ballads, madrigals and coplas of the Spanish Renaissance.

After leaving Monash, Professor Keightley lived and taught in Colombia and then, on his return to Melbourne, continued with his writing and developed a new interest -- researching the history of the Spanish monastery of New Norcia in Western Australia and cataloguing its unique historical archives. He also resumed his long association with Christ Church, South Yarra.

Dr Kenwood remembers Professor Keightley as a professor of the old school. "He was an uncompromising champion of intellectual vigour, true scholarship, wide culture and clear style," he said.