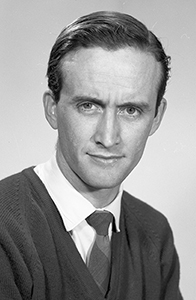 Deane Robert Blackman was born on 3 November 1935 in Melbourne, where he spent most of his life. He died on 16 September 2021 in Berwick. He commenced his academic career as an Assistant Lecturer at Melbourne University in 1959, retiring as Reader in 2003, after a long career in the Department of Mechanical and Aerospace Engineering at Monash University. During his years at Monash he contributed significantly to the intellectual environment and standing of the university, and to the development of facilities, software and practices in the department and across the university.

Deane was awarded B.Mech.E. (Hons I) (Melbourne) in 1957, M.Eng.Sc. (Melbourne) in 1960 and Ph.D. (Soton) in 1964. The Fluid Dynamics and Acoustics group at the University of Southampton were in those years the pre-eminent researchers in these fields in the UK and the links made with them aided the establishment of that area of study under the department’s foundation professor, Ron Barden.

In 1959, while a graduate student at the University of Melbourne, he married Janice Callander, who survives him. Their children: Leon Deane, Guy Arthur, Lisa Veronica each gained university degrees, married and now live in Melbourne. Music was an important part of their lives and Deane enjoyed both the playing and the physics of the violin. The family enjoyed outdoor activities, including horse riding, camping and touring in their 4WD.

Deane excelled in each of the many endeavours he took on. Following an early interest in the conversion to metric (SI) units of measurement he became a member of the Standards Association Australia’s Committee in this area, then a Member of the Technical Advisory Committee of the Australian Metric Conversion Board, the author of the monograph “SI Units for Engineers” published by Macmillan in 1969, and appeared in numerous radio and television interviews. Perhaps it was this exposure that led Brian Naylor, then the doyen of Australian TV news reporters, to invite him to explain the details of the American moon landing program, on Channel 7. This was so successful that it became a regular weekly spot for many months, and later whenever a scientific event was newsworthy.

After a decade of living near the university, the family moved to a 2 Ha property in Narre Warren East where they could have a dog, and later many dogs, and graze Clydesdales. He then took up horse riding, at a late age for this activity, and within a few years rose to become a judge at horse events, including international meetings – a status usually attained by birth into a noted horsey family. Another extra-curricular activity was his interest in codes and ciphers. From time to time he published papers in the Journal of the American Cryptogram Association, a couple of which are still cited some decades after publication, and he continued to publish there after his retirement.

In the early years of the university, class lists were paper documents. The few computers required specialist knowledge to run and user-friendly interfaces didn’t exist. In this environment Deane set up computer-based class lists, first for the core Fluid Dynamics courses, then for the department and finally for several faculties. His programs were used for several years before the university Computer Centre took responsibility for this service as computers became more widely available and easier to use.

At Monash, he lectured primarily in Fluid Mechanics, Numerical Methods and Computation but his most significant contributions were to postgraduate teaching where he developed and led a sequence of lectures, practice sessions and written work providing instruction in logic, argument and disputation, and the logical presentation of ideas. This sequence owed much to his own classical education and subsequent readings. For some students and staff these concepts were incomprehensible but for others they opened a world of scholarship and ideas sorely missing in the
constrained technical/mathematical undergraduate curriculum. Courses directly based on his were given, with acknowledgement, in several overseas universities by graduates of the department, including the Kanazawa Advanced Technical University in Japan. He was principal or assistant supervisor to a dozen PhD students a couple of whom went on to found engineering consultancies, another who became Dean of Science and Engineering at Victoria University and another who held a chair at Cambridge University.

There were two main threads to his research: translating and re-appraising classical Latin treatises dealing with engineering aspects, and fluid dynamics involving either turbulence or wave dynamics. His contributions in translation, annotation and documentation resulted in 4 massive tomes that brought his knowledge of classical engineering practice, modern engineering terminology and classical Latin to bear in a field where those skills and
knowledge were generally limited: Concordantia Tacitea: a Concordance to Tacitus; Concordantia in Itinerarium Egeriae, and Concordantia in Mulomedicinam Chironis all three co-authored with Gavin Betts and published by the German academic publisher Olms-Wiedmann; and Frontinus’ Legacy: Essays on Frontinus’ de Aquis Urbis Romae, co-authored with Trevor Hodge and published by University of Michigan Press, with shorter publications in the Oxford Journal of Archaeology and other journals.

In the area of fluid mechanics, some of his most important papers were on the characteristics of wind-generated capillary waves, understanding and quantifying wave growth, and the transfer of momentum and energy from the wind to the ocean surface. His other refereed papers cover a wide spread of topics including turbulent boundary layer theory, control systems, hydrodynamics of blood flow, design and use of teaching rigs, software tools for data analysis, teaching of logical thinking, measurement and analysis of ocean wave characteristics.