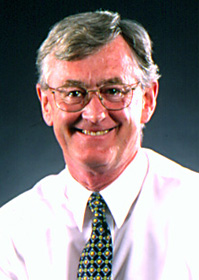 Mr John White, the former Caulfield and Peninsula Campus Director and Adviser to the Vice-Chancellor on Sport, passed away last week.

Mr White succumbed to a serious illness on Friday 7 April and was farewelled this morning by family, friends and colleagues at a funeral mass at St Catherine's Catholic Church in Moorabbin.

Acting Vice-Chancellor Professor Stephen Parker said Mr White had been highly respected by staff and students across the university. "His sense of humour and down-to-earth manner endeared him to all," Professor Parker said.

"His natural warmth, honesty, kindness, ability to listen and commitment to making a difference will long be remembered by those with whom he had regular contact."

Mr White began his association with the Caulfield campus in 1966 (then Caulfield Technical College), working in the new Electronic Data Processing department.

His most recent appointment was as Adviser to the Vice-Chancellor on Sport. A keen sports fan, Mr White could regularly be seen on Saturdays supporting the Monash Blues football team.

"John will be greatly missed by his many friends and colleagues at Monash," Professor Parker said.