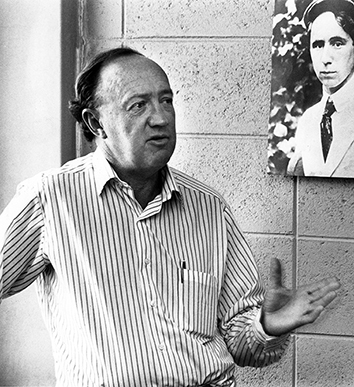 A popular concept of grotesque is that it is something to be distrusted; a shadow side of human nature that should remain repressed. Professor Philip Thomson, former Chair of German Studies, who has died aged 81, was puzzled by its powerful effect on people and set out on a journey to discover why.

The grotesque is primarily concerned with the distortion and transgression of boundaries, and the clash between the comical and profane.  Yet early in his career, Philip recognised that grotesqueness also offered insight into the human condition. His resulting book, The Grotesque, (1969) was one of the few studies that examined the phenomenon in general terms and was very well received, leading to international invitations to speak on the subject. His later work on the poetry of German dramatist Bertolt Brecht, which was ten years in the making, challenged established assumptions about the artist and was described as refreshingly critical, as well as “unabashedly personal” in that he didn’t hide behind a forest of secondary sources. Philip’s research interests also included intellectual relations, modern German poetry, literary theory and contemporary German and Australian intellectual life.

Philip came to Monash in 1967 as a senior teaching fellow in the department of modern languages.  A year later he was appointed lecturer and then senior lecturer. In 1990 he was appointed to the Chair of German Studies which he held until 2001. He also headed The School of European Languages and Cultures 1999-2001.

Philip was considered a scholar of considerable intellect and originality with a close command of the classical canon, especially Goethe, and uncommonly perceptive in the area of contemporary criticism. He was regarded as an outstanding academic administrator, never losing sight of the general principles whilst being able to attend meticulously to the day-to-day details of running a department.

As a teacher he was witty, humorous and interested in his students. He combined interpretation with a sound theoretical basis, and expressed himself vividly and concisely. He was not, mused one of his colleagues, the sort of person who kept to the beaten track.  He valued independence in his students and strived to help them accomplish this. His direct approach was considered refreshing rather than challenging.

Philip John Thomson was born on 3 January 1941 in Newcastle, NSW, the eldest of three children.  He was educated at Newcastle Boys’ High School, afterwards attending the University of NSW (Newcastle) where he majored in French and German, graduating with first class honours in 1961. His decision to study German was, in part, due to two teachers. One was an Englishman who gave him a glimpse into the multifariousness of the world. The other was Professor Leslie Bodi, Monash’s Founding Professor of German, who had recently arrived from his native Hungary and was working at Newcastle where, according to Philip, he was filled with a “confusing energy.”  It was Professor Bodi who gave the young Philip a taste of what an intellectual life might be.

After graduating, he completed a diploma of education at Newcastle before heading to Germany for a couple of years on a German Exchange Service scholarship. On the invitation of Professor Bodi, he took up a teaching fellowship at Monash on his return, where he also embarked on a PhD examining the grotesque in modern German poetry, 1880-1933. This was followed by a Humboldt postdoctoral research fellowship to Germany (1971-1972).

Philip was a member of the Australian Universities Language and Literature Association, the Modern Language Association of America, and the International Brecht Association amongst others. He regularly gave papers at the annual conferences for Germanists (set up by the Departments of German at both Monash and the University of NSW in 1977). From 1979-1981 he was Director of the Centre for General and Comparative Literature.  He was elected Fellow of the Australian Academy of the Humanities in 1991.

Philip was married to Helen Thomson, nee Dimsey, an academic who also worked in the Faculty of Arts at Monash. Helen was a long-time theatre critic for The Age and The Australian and a founding member of the Association for the Study of Australian Literature. The couple had two children, Miranda and Guy. On retirement, they spent much of their time at their house at Moggs’ Creek, however they returned to live in Port Melbourne shortly before Helen died in 2016. Philip was appointed Emeritus Professor in 2002.