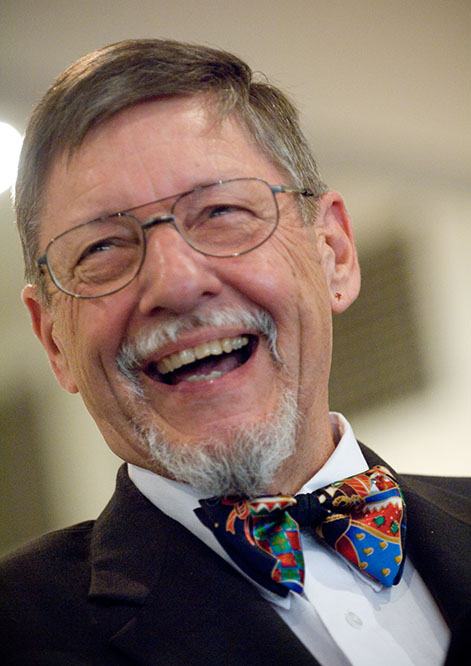 Former Deputy Vice-Chancellor, Emeritus Professor Gary Bouma AM, who has died aged 79, diligently followed his own personal work ethic, namely, “to give more than you get.”

Gary was an eminent sociologist who spent his life working to promote greater respectful inclusion of races, religions, genders and sexualities. He stood up to discrimination and used his vast intelligence to patiently educate those who feared difference.  His research in sociology, religious pluralism and multiculturalism directly addressed the contemporary challenges of what it means to be human.

Gary’s story as to what led him to become an agent of social change began with his birth in the US Midwest in the early 1940s. It was a time of racial tension and civic unrest; his father was an academic and activist and the young Gary learned by example how to be a positive influence. He  assisted him in campaigns for civil rights and lost friends during the McCarthy era as a result of his actions. The Ku Klux Klan burned a cross in the family front yard shortly after major race riots in Detroit; it was an event which etched into his soul a commitment to work to end injustice and oppression.

As an adult Gary worked in the slums of south side Chicago followed by Harlem, New York, where he witnessed many young people turning to drugs as a way of escaping the ghetto. When Richard Nixon came to power in 1969, Gary moved to Canada, broadening his understanding of sociological concepts beyond what he called “yankocentrism”.

Gary came to Monash as a lecturer in anthropology and sociology in 1979 and quickly worked his way up the academic ladder, becoming deputy head of the Centre for Studies in Religion and Theology in 1993, Personal Chair of Sociology in the mid-nineties, and Associate Dean of Arts (Research) 1998-2002. He was Deputy Vice-Chancellor and Vice President (Research and Development) 2002-2004.

Much of his career was devoted to showing that religion is a legitimate causal agent to social change; indeed, this belief was the common thread that wove throughout his professional and non-academic life.

At Monash, Gary was not limited to his school, department or discipline. He stepped in wherever there were gaps, making contributions to governance but also to policy development, notably in research ethics. Indeed, he was so productive that a colleague once mused “is there just one Gary Bouma, or has he a twin?”

His achievements included the founding of the Centre for Studies in Religion and Theology and the Associated BA/BTheol double degree taught with the Melbourne School of Divinity.

Among his many other contributions during his time at Monash, he was Head of the School of Political and Social Inquiry 2004-2006, Research Professor in the School of Humanities, Communications and Social Sciences (Gippsland) 2001-2002 and was for several years chair of the University’s Ethics Committee.

It was in this role that he sealed the fate of former Vice-Chancellor David Robinson in 2002 when he was accused of historical plagiarism. After the initial scandal came to light involving just two cases, subsequent investigations revealed other potential examples, further implicating Robinson. As chair of the Ethics Committee, Gary was charged with the unenviable task of determining whether these recently unearthed alleged instances of plagiarism were accidental or deliberate, and therefore constituted academic misconduct.  He ruled that the pattern did not appear to be accidental and Robinson resigned as a result.

Gary Donald Bouma was born in Grand Rapids, Michigan, in February 1942, the son of Dr Donald Bouma, a notable academic who established the Sociology Department at Calvin College, and Ailene Goetz. As a child, he was at a loss when someone asked him what his father did. To answer, ‘sociology’ brought blank stares or charges of socialism. As such, Gary retained a pressing need to have a clear idea of what defined sociology, a hunt which spawned endless conflict and debate with colleagues throughout his career.

Gary attended Grand Rapids Christian High School and afterwards obtained a BA from Calvin College (1963). This was followed by an M.Div. from Princeton Theological Seminary (1966), an MA in Sociology from Cornell University (1968) and a PhD from Cornell (1970) examining the sociology of religion upon which his thesis advisor said to him ‘why bother Bouma, there is not going to be any religion by the end of the twentieth century’.

Whilst at Cornell, Gary was part of a group which established the Upstate New York Clergy Consultation on Problem Pregnancy which provided counselling and referrals to safe, but at that time still illegal, abortions. The group also lobbied state and federal politicians, informing them of both the number of abortions they had facilitated and the number of deaths from abortions conducted by unqualified people. At one point, Gary was arrested but let off when the police saw they were preventing harm to women.

Throughout his career his research took him into areas of family socialization and personality development, demography, social psychology and social history. It was a diversity of competence that was considered rare in contemporary higher education.

It was through the sociology of religion, however, that he was perhaps best known. Later work included a major study of religious plurality in multicultural Australia which made strategic comparisons with other societies. He also conducted research into the management of religious diversity, interfaith dialogue and theological reflection. Gary devoted much energy to supporting moves to establish social justice and increased social cohesion through inclusion and campaigned for greater acceptance of the LGBTIQ community. He also worked to reduce the barriers between religious groups through interactions designed to increase understanding and mutual respect.

Gary authored more than 30 books in his lifetime. Earlier this year he published his latest edited volume, Freedoms, Faiths and Futures (Bloomsbury, 2021) whilst an earlier work, Australian Soul: Religion and Spirituality in the 21st Century, (Cambridge University Press, 2006), gained glowing reviews not only in academic circles but in the press and had major impact in community debates about the renaissance of spirituality.

In 2004, Gary was appointed the UNESCO Chair in Inter-religious and Intercultural Relations, Asia Pacific, at Monash. He was Past President of the Australian Association for the Study of Religions and Chair of the Board of Directors for The Parliament of the World’s Religions (2009).  He also spent many years serving the Church and was an Associate Priest at St John’s Anglican Church, East Malvern.  In later life he married Patricia Park, an Anglican Priest.

Gary was a recipient of the Faculty of Arts Award for Excellence in Research Supervision (2004), the Bringing Australians Together Affinity Award (2004) for his contributions to inter-faith harmony, and the Australian Intercultural Society’s Building Bridges Award, 2003. In 2013, he was appointed a Member of the Order of Australia (AM) for services to sociology, interreligious relations and the Anglican Church of Australia. At Monash, he was appointed Emeritus Professor in 2008.

He kept working right up until the end of his life and maintained an office at Monash’s Caulfield campus. By this time, he had crafted a definitive understanding of sociology and in doing so, answered his life-long question.   It was, he believed, founded in academia and inspired by critical engagement with people, communities, groups, movements, and policy making. It was out of the confluence of these activities that the best teaching and research flowed.