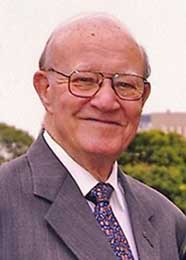 The University community is saddened to hear of the recent passing of the Foundation Professor of Physics, Robert Street, at the age of 92.

Born in Yorkshire in 1920, Professor Street was a pioneer in the field of experimental physics, dedicating much of his life to magnetics research.

He began his career during WWII, researching ‘absolute measurement of power’ at the Air Defence Research and Development Establishment in the UK.

He went on to cement his reputation as a leading researcher and educator in physics at several universities in England, producing landmark papers on magnetism.

In 1960 he moved to Australia to be the Foundation Professor of Physics here at Monash - a role he held for 14 years.

He earned a Doctor of Science from the University of London in 1966. In 1974 he moved to the Australian National University to take up the Directorship of the Research School of Physical Sciences.

From 1978 until his retirement in 1986, Professor Street was Vice-Chancellor of the University of Western Australia and in 1985 he was appointed an Officer of the Order of Australia.

In 2012, the School of Physics established the Robert Street Doctoral Prize to honour this outstanding scientist. The prize recognises and encourages talented doctoral research students in physics.

He is survived by his wife Joan, daughter Associate Professor Alison Street AO, and son Nicholas.