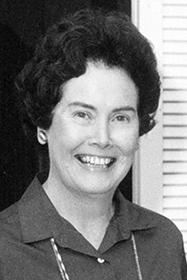 The University community is deeply saddened to learn of the death of Mrs Rena Martin on Wednesday, 20 April 2016, at the age of 87.

Clayton was then the only Monash campus, and the Martin family lived in the residence now known as Monash House.

Mrs Martin was deeply involved in the fundraising and social events of many voluntary groups working behind the scenes to improve the “quality of life” on campus.  She encouraged and helped co-ordinate their work, believing this would build a better university and establish stronger links between Monash and the wider community.

Proud that her four children were all Monash graduates, Mrs Martin knew how important graduation ceremonies are to the families of those receiving their degrees.  During her husband’s term as Vice-Chancellor she was a steadfast presence at graduations, sharing in the collective joy and significance of each special occasion.

Rena and Ray Martin were married in Cambridge, UK in February 1954.  They had three sons, and one daughter, now Associate Professor Lisa Martin of the Monash School of Chemistry.

Monash University is extremely grateful to Mrs Rena Martin for her invaluable contribution to its strength and growth during some of its most defining years, and offers its deepest sympathy to Emeritus Professor Ray Martin and his family.