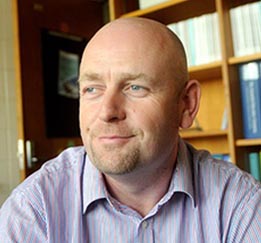 On 1 August, 2018, our much-valued colleague Professor Colin O’Hare passed away suddenly as the result of an accident.

Monash’s first Professor of Actuarial Studies, Colin was a popular teacher, researcher and PhD supervisor. He taught a number of undergraduate and postgraduate units at Monash Business School and was involved in two nationally significant research collaborations.

A qualified actuary with more than a decade of actuarial experience, Colin joined Monash Business School in October 2012 as Actuarial Studies program director, before being promoted to Associate Professor in 2014 and then to Professor in 2016.

Colin’s research interests were in the modelling and forecasting of mortality rates and the design and pricing of post retirement products. In 2016, Colin and other colleagues were awarded a three-year ARC Linkage grant, ‘Towards a Superannuation System fit for the future’.

In 2017, he also joined a collaborative partnership through CSIRO - Risklab at Data 61. This research provides the first picture of the distribution of superannuation and other assets amongst households and individuals and provides a new empirical basis for further study into current levels of adequacy of superannuation savings.

A highly regarded teacher, Colin was named a finalist for Most Innovative Teacher of the Year by Times Higher Education (2011) and recognised by VISIR Network as one of the top 20 micro-innovators in Europe (2012) for his work in student-centred learning.

Colin will be greatly missed by all his colleagues in the Department of Econometrics and Business Statistics and the wider community in the Faculty of Business Economics and Monash University.

We send our deepest condolences to Colin’s wife Diane, his family, colleagues and friends.