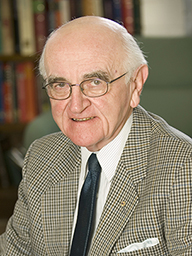 At a valedictory dinner to mark the retirement of Louis Waller from Monash University, former High Court Justice Michael Kirby remarked that the eminent law professor was “…no full stop. Nor is he a semicolon. He is a question mark. An exclamation mark. A couple of brackets. And many books and pages yet to be filled.”

Emeritus Professor (Peter) Louis Waller AO, who died on Tuesday 8 October 2019 aged 84 years, has finally reached a full stop and closed the book on a remarkable life. And, as Justice Kirby predicted, he filled the pages with his passion for justice and dedication to humanity right to the end.

Louis’ story was one which was characterised by reason and compassion, despite its beginnings being rooted in danger and barbarity. He was born in the Polish town of Siedlce, 100 kms east of Warsaw on February 10, 1935. Three years later his Jewish parents, Hilda and Jack, fled the country with their only child, leaving behind a family many of which perished in the Holocaust. The events of his past left an indelible mark on Louis, shaping his view of law as a tool to mould constitutionalism, protect human rights and defend the vulnerable.

The family settled in Melbourne and the young Louis went to Brighton Road State School, Elwood Central School and University High. In 1952 he entered the University of Melbourne, graduating LLB with Honours in 1956. He then headed to Oxford, where he gained a Bachelor of Civil Law with First Class Honours. On returning to Australia he spent six years at the University of Melbourne, working his way up the academic ladder to become a senior lecturer. His subject was Introduction to Legal Method, and he was by all accounts, a stimulating teacher, wandering around the classroom as he lectured, contemplating which student to tax with his next question. Along with his good friend, the late Professor of Jurisprudence Peter Brett, he developed new and innovative ways for teaching Criminal Law, which for many years had languished.

Some of his fledgling pupils at the time were Gareth Evans AC, QC, and Kenneth Hayne, AC, QC, who described him as “electric” while Julian Burnside, AO, QC, once recounted in an interview that he was, “THE best teacher I had ever met.”

In 1964, another good friend, Professor David Derham, who had been appointed Foundation Dean of the newly established Monash Law Faculty, invited Louis to visit the campus.  Captured by the sense of vitality and optimism he took up an offer of appointment as the Sir Leo Cussen Professor of Law, a position he held for 36 years.

In the early 1980s, Monash was at the forefront of cutting-edge research into infertility. With the birth of the world’s first “test tube babies”, science was creating ethical dilemmas faster than they could be solved. Louis was given the considerable and highly sensitive task of designing new laws to govern the in-vitro fertilisation (IVF) treatments. Within six months the Victorian Government’s Committee to Consider the Social, Ethical and Legal issues – informally known as the Waller Committee – released a summary of its views on the use of donor gametes. Unsurprisingly the recommendations attracted both praise and criticism, given the deeply held beliefs of diverse religious and secular groups around what it is to be human. The minefield of bioethics required sensitive leadership as it sought to give due respect to all sections of the community – indeed, Louis found his own religious views confronted. Yet he was also a great believer in luck, once stating, “…the first bit of luck is choosing your parents… one doesn’t have to be very imaginative to appreciate how it shapes and influences your life.”

The birth of Australia’s first IVF baby gave rise in Victoria to the Infertility (Medical Procedures) Act 1984. When it came into force in 1988, it was the first legislation in the world to regulate IVF and associated human embryo research.

Louis went on to chair the Standing Review Advisory Committee on Infertility (SRACI) between 1984 and 1994.  He then became the inaugural chair of the Infertility Treatment Authority (now VARTA) in 1995 and held this position until 2001. During this time he oversaw the first review of the Act.

Louis’ work in the field of law and medicine attracted much attention and established him as a respected leader in a most difficult and profound area of legal discourse. He was aware of the gravitas of the task – in an essay reflecting on the complexities surrounding early biotechnology, he likened it to being “present at the Creation,” upon which rests, unequivocally, “…the obligation to effect the best ordering of this new universe.” For many years he served as a member of the Ethics Committee of the Walter and Eliza Hall Institute of Medical Research and was also a lay member of the Appeals Committee of the Australasian College of Surgeons. Within Monash, Louis was responsible for the introduction of a combined Bachelor of Laws/Bachelor of Medicine degree and he helped develop the law subject, Elements of Forensic Medicine. He also inaugurated the subject Legal Issues in Medicine, available to both Law and Medicine students. From 1997 he was Chairman of the Appeals Committee of the Royal Australasian College of Surgeons.

Louis was shortlisted for the role of Monash Vice-Chancellor, ahead of Ray Martin’s retirement in 1987. He was, he admitted, a “bit disappointed” when the appointment went to Mal Logan, saying in an interview, “I guess it was the first time I had applied for something that I didn’t get!”

Louis’ devotion to community activities was a continuing feature of his life and career. He once totted up that he’d been a member of 21 committees. In 1972 he became Foundation President of the Victorian Aboriginal Legal Service, a position he held until 1974. He was a member of the Law Reform Advisory Council from 1977 to 1988, Convenor of the Criminal Law Working Group from 1978 until 1985, and a member of the Victoria Law Foundation from 1979 until 1996. He was particularly involved with the Red Cross and was the first Chair of the Australian Red Cross Society's International Humanitarian Law Committee and a member of the Geneva Conventions Dissemination Committee. In the Australian Jewish Community, Louis participated in and led a number of different bodies, many of which were concerned with tertiary level Jewish studies. In 1992 he assumed the role of Chairman of the Advisory Committee of the Australian Centre for Jewish Civilisation within Monash University (ACJC), a body dedicated to spreading knowledge on the significance and evolution of Jewish civilisation and its contribution to the world.

Louis was also a skilled writer, applying the same craftsmanship to the written word that he attached to lecturing. In essays, his deft pen captured many an arresting thought through the use of skilful metaphor which challenged the reader to think deeper. Together with Peter Brett, he published the first Australian casebook for teaching criminal law Cases and Materials in Criminal Law, which served as a vibrant antidote to some of the more plodding English texts.

Other books he co-authored include An Introduction to Law and Cases and Materials on the Legal Process. He also contributed chapters on criminal law, legal education, evidence, criminology, forensic medicine and issues of medical technology and law reform.

According to those that knew him, Louis had a remarkable capacity to inspire. His credo in his teaching work was ‘accentuate the positive’ though he was not short of a swift verbal riposte. Julian Burnside credited him with making him see the law as a servant of society, not vice versa, while Justice Kirby, although never a pupil of Louis’, still benefited from his teaching. He recounted how, in 1980 he was invited to record on video a model charge to a jury in a criminal case. Reading from his script, he described the role of the jury as deciding whether an accused person is guilty or not. Louis saw the film and later sent a letter pointing out that it is the jury’s job to decide whether ‘the Crown’ has proved the accused guilty beyond reasonable doubt. This distinction was a lesson Justice Kirby never forgot.

Over the years, a number of laurels were bestowed on Louis. In 1977, he was appointed a Fellow of the Academy of Social Sciences in Australia and he received an honorary Doctor of Laws from Monash in 2005. He was an Honorary Associate in the Department of Forensic Medicine at Monash. In 1989 he was appointed an Officer in the General Division of the Order of Australia (AO).

After his retirement, Louis continued to teach and undertake research in the area of forensic medicine, and the complex legal issues surrounding medicine.

He and his wife Wendy, whom he married in 1959, had four children, Michael (who died aged 3), Anthony, Ian and Elly.