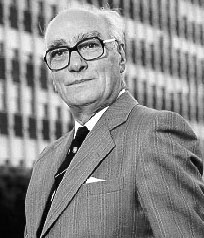 Monash has paid tribute to its Foundation Vice-Chancellor, Sir Louis Matheson, who passed away on 27 March 2002.

Sir James Adam Louis Matheson, who was Vice-Chancellor of Monash from its beginnings in 1960 until 1976, suffered a stroke in 1989, after which his health deteriorated.

Sir Louis, who was 90, is survived by his wife, Lady (Audrey) Matheson, and three sons.

Vice-Chancellor Professor David Robinson expressed condolences to the family of Sir Louis and said that he had made a major contribution to the development of higher education in Australia.

"During its formative years, Monash University was in confident and able hands. He set the tone for Monash as a university that had fresh and innovative ideas," Professor Robinson said.

He came to Australia in 1947 to take up an appointment as professor in engineering at the University of Melbourne. In 1950, he returned to England to become the Beyer Professor of Engineering (1950-59) at Manchester University.

From this position, he was recruited to lead Monash.

Sir Louis welcomed Monash's first batch of 363 students in 1961. By the end of his term as vice-chancellor, the student population at Monash had grown to 13,751, and Monash had emerged from its formative years as a strong and distinctive institution.

In his book Monash - Remaking the University, Professor Simon Marginson described Sir Louis' 16 years at the helm of Monash in the midst of challenges and change as highly successful.

"Student power notwithstanding, few vice-chancellors have been as uniformly well regarded by their contemporaries, or so successful in achieving their stated aims. If the times favoured a builder ... Matheson was a builder for the times," Professor Marginson writes.

A celebration of the life and achievements of Sir Louis will be held at Monash on a date to be announced.