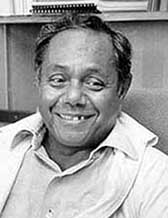 Associate Professor Isaac Brown, a Monash University academic who made important contributions to the advancement of Indigenous Australians in education, has passed away.

He was awarded a life membership of Speech Pathology in 2008.

As the inaugural director of the highly successful Monash Orientation Scheme for Aborigines (MOSA), Associate Professor Brown/Irruluma Guralwin Enumbura was an inspirational figure in both the Monash and Indigenous communities.

MOSA was set up in 1984, responding to a strong need for a mechanism to ensure Aboriginal students were academically ready for university.  It ran for more than 15 years. As a teaching-only venture, it sat alongside a specialised Aboriginal Research Centre, of which Isaac also oversaw the creation.

Under Professor Brown’s stewardship, MOSA flourished. In 1987, an external review praised it as a “program of national significance”. Isaac himself was remembered in the recently published history of Monash, University Unlimited, as, "an utterly brilliant Director.”

Today, many Indigenous people who hold academic, government and high-level business positions trace their success back to MOSA.  There are generations of Aboriginal and Torres Strait Islander people who are grateful to Isaac Brown, his energies, his inspiration and his dedication.

His legacy at Monash, and more broadly in the area of Aboriginal and Torres Strait Islander education, is both enduring and widespread.