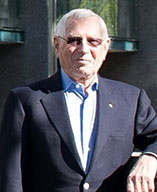 The Monash University community was saddened to hear of the recent passing of Associate Professor Jack Hansky AM.

A physician and gastroenterologist, Associate Professor Hansky had been involved with Monash from when he joined the Department of Medicine at Prince Henry’s Hospital in 1963. Until his retirement from Monash Medical Centre in 2002, he had had some contact with every Monash medical student graduate since 1963. He became a member of the Monash University Medical Foundation board in 2004.

Associate Professor Hansky and his wife Paula had a long history of generosity to various causes, including medical research.  Through the Monash Medical Foundation, they chose to support Professor Michael Cowley’s research at the Monash Obesity and Diabetes Institute.

In 2008, Associate Professor Hansky was appointed a Member of the Order of Australia for service to medicine in the field of gastroenterology, particularly through research and clinical practice in the treatment of gastric bleeding, to medical education and to the community.

Colleague and former Head, Department of Medicine Professor Stephen Holdsworth said Associate Professor Hansky was a wise and senior clinician who was very supportive of his younger colleagues and a mentor to emerging academics.

“Associate Professor Hansky was a pioneer in the development of radioimmunoassays, particularly in the discovery of the role of gut hormones in disease,” said Professor Holdsworth.  “At one stage, he was the highest cited academic at Monash University.”

Throughout his career, Associate Professor Hansky made a number of significant contributions to his field including serving as President of the Gastroenterological Society of Australia and Chairman, Senior Medical Staff Prince Henry's Hospital.  He was also Chairman Senior Medical Staff, Medical Advisory Committee Monash Medical Centre and a Member of the Board of Management MMC.  He co-authored over 300 scientific publications.