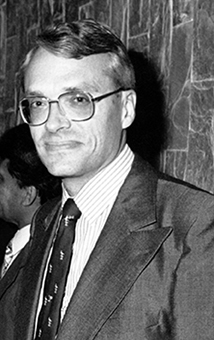 Emeritus Professor Merle Calvin Ricklefs, AM, who died on December 29 2019 aged 76, was one of the most acclaimed international scholars of Indonesia. He used his considerable intellectual power to create an exceptional historical legacy of Australia’s nearest neighbour.

It is thanks to Merle that Monash houses a substantial collection of Indonesian books and archival materials, which he established over his 13 years as Professor of History.  He was, according to colleagues, a “massive figure in the field of history and Indonesian studies,” an innovator who took seriously the finer, detailed texture of Javanese history as well as the broader overview.

Merle was fluent in Dutch, German, French and Javanese as well as Indonesian, the lingua franca in a country which consists of 350 ethnic groups speaking more than seven hundred languages.  He was a prolific writer and was best known for his impeccably researched trilogy; Mystic Synthesis in Java: A History of Islamisation from the Fourteenth to the Early Nineteenth Centuries (2006), Polarising Javanese Society: Islamic and Other Visions (c. 1830-1930) (2007), and Islamisation and Its Opponents in Java: A Political, Social, Cultural and Religious History, (c 1930 to the Present) (2012).

In the trilogy, Merle’s panoramic vision encompassed a mighty seven-century sweep of the history of Islamization in Java beginning in the 14th century, continuing an argument for understanding the ongoing process of religious transformation up to the present day.

Merle used the study of Java to examine broader themes of changing societies and the shifting dynamics between religion and state.  All three narratives contain meticulous data to support his arguments, a hallmark of Merle’s work.  As Professor the Hon Gareth Evans, AC, QC, joked at the launch of Islamisation and Its Opponents in Javain 2012; “I wouldn’t want to have been a publisher’s fact checker, or one of the army of them that would have been necessary, for this one – though of course such is Merle’s scholarly reputation that I’m sure no such second-guessing was seen as remotely necessary.” The final book in the series went on to win the 2015 George McT. Kahin Prize for best book on Southeast Asia, and was long-listed for the ICAS Book Prize 2015 for Best Study in the Humanities. One reviewer claimed it to be “one of the most masterful ever written on religion and politics in Indonesia.”

Merle’s work became increasingly significant in a world concerned about religious intolerance and enforced morality. His scholarship encouraged the view that nothing is static and the public must question its own time-bound assumptions regarding Islam.  Another of his titles, A History of Modern Indonesia ca. 1300 to the present (1981), is considered a standard teaching text in many universities.

Merle will also be remembered for his deep passion for and commitment to education for indigenous Australians. In the early 1980s he was the co-founder and driving force behind the Monash Orientation Scheme for Aborigines (MOSA), which was the first bridging program for Aboriginal people in an Australian university. The year-long programme was established to prepare Aboriginal students suffering great educational disadvantage for university study. As a teaching-only venture, it sat alongside the Aboriginal Research Centre and was a huge success, running for 15 years. In 1980, when Merle arrived at Monash, indigenous tertiary student numbers in Australia were lamentably low, with an estimate of no more than 10 or 15 across the whole country. By the time Merle left in 1993, the Monash MOSA programme had produced a dozen graduates.

Merle was inspired by his personal opposition to racism “in all its forms and fruits.” He worked with Dr Eve Fesl – the first indigenous Australian to receive a PhD from an Australian university and then Director of the Aboriginal Research Centre - in his quest to establish MOSA, consulting with Aboriginal leaders and looking at similar programmes in Canada. The first nine students were drawn from all mainland states and the Northern Territory and began their Monash journey in 1984. Today, many indigenous people who hold academic, government and high-level business positions trace their success back to the pioneering scheme.

Also in the 1980s Merle entered Australia’s ‘immigration debate’ with University of Melbourne historian Professor Geoffrey Blainey, who argued that the country should limit Asian immigration. Merle, with his Monash colleague, Professor Andrew Markus, edited a critique of Blainey’s views entitled Surrender Australia? Essays in the Study and Uses of History (1984).

Merle came to Monash in 1980 as Professor of History. Originally from Iowa, US, he received his BA from Colorado College in 1965, graduating magna cum laude in History. He undertook a PhD at Cornell University, his thesis title being Jogjakarta under Sultan Mangkubumi 1749-1792. A history of the division of Java. From there, he lectured at The School of Oriental and African Studies (London University) before moving to Australia.  After leaving Monash in 1993, he became Director of the Research School of Pacific and Asian Studies at the Australian National University and, more recently, Professor of Southeast Asian History at the National University of Singapore.  He also held appointments at All Souls College, Oxford, and Leiden University, the Netherlands, and was foundation Director of the Melbourne Institute of Asian Languages and Societies at the University of Melbourne, a position he held until 2005.

Merle wrote and edited several other major books and many book chapters and articles. He was sectional editor for Southeast Asia for the 3rd edition of the Encyclopaedia of Islam, and a co-editor of both the monograph series, Handbook of Oriental Studies (Handbuch der Orientalistik), and Southeast Asia Library (SEAL). He was also a member of the editorial boards of Studia Islamika, Journal of Indonesian Islam and Journal of Southeast Asian Studies. He was a member of the Australian Department of Foreign Affairs and Trade Editorial Advisory Board for the publication series, Documents on Australian Foreign Policy.

Merle took on numerous roles and earned many plaudits during his career.  He was appointed Emeritus Professor by Monash in 2019, and held the same title at the ANU. Merle was a Fellow of the Australian Academy of the Humanities and was a former member of the Australian National Commission for UNESCO. He was a founding member of the Australian Foreign Affairs Council and also a member of the International Council of the Asia Society (New York). In 2003, he was awarded a Centenary Medal by the Government of Australia for service to Australian society and the humanities in the study of Indonesia.

In 2010 he was elected an erelid (Honorary Member) of the Netherlands Koninklijk Instituut voor Taal, Landen Volkenkunde, and in 2017 he was appointed a Member of the Order of Australia (AM). He continued to publish a series of major scholarly works on the history of Islam in Java, in both pre-colonial and more recent times, culminating in Soul Catcher, his valedictory portrait of the 18th century mercurial rebel prince, Mangkunegara 1, which was launched at Monash in 2018 and received high praise in Australia and internationally.

During his time in England, Merle married Margaret, and the couple had three children, Norman, Charles, and Deborah (who predeceased her father). Upon retirement, the couple lived in the high country of Victoria, where they joined Charles running beef cattle. However, Merle remained academically active right up until the end, carefully checking the forthcoming Indonesian translation of Soul Catcher during his last few weeks before finally closing the book on his own remarkable life.

Edited version of article published 9 January and in The Insider, 30 January 2020.