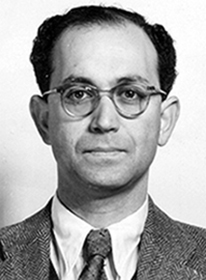 Joe Isaac had hopes of becoming a doctor. Instead he became one of the most influential contributors to both academic scholarship and public policy in Australian industrial relations.

He seamlessly linked theory and practice of industrial relations, grasping the opportunity to influence wage legislation and facilitating the marriage of economics and law upon which successful wage determination has depended in Australia. His dedication to economic analysis has had a long-lasting impact, transforming academic scholarship and public policy in Australia’s industrial relations for more than 60 years.

Joe came to Monash in 1965 as one of the foundation professors in the Faculty of Economics and Politics. Under his guidance, Monash became a lively centre for industrial relations education and research. In addition to bridging the divide between industrial relations and academia, his teaching inspired numerous students to pursue higher-level careers in unions, business and government. Their work bore Joe’s authoritative stamp and disseminated his influence further in the development of industrial relations.

Joseph Ezra Isaac was born in Penang, then a British colony, in March 1922, the son of Jewish parents. His father, a wholesale general merchant, had migrated there from Mesopotamia, and his Burmese-born mother was the daughter of a colonial civil servant. The family also spent several years living in Java, where Joe learned Dutch and Bahasa Indonesia. These early experiences of multiculturalism and language acquisition were a great benefit to his career in later years.

After completing the London Matriculation Examination at the Penang Free School, Joe entered the University of Melbourne in 1941 to study commerce. His initial wish to do medicine was thwarted by his father, who warned him that “doctors have a dog’s life”. After working in an accountant's office during the holidays, however, Joe was adamant that such a career was not for him. Thankfully, he discovered a passion for economics, which met with his father’s approval, and he graduated BCom and BA (Hons) in 1945.

Afterwards, Joe was appointed tutor in economics at the University of Melbourne. That same year, his language skills and knowledge of the Dutch East Indies led him to becoming part of a mission to Batavia for the Australian government, the purpose of which was to advise on policy during the political turbulence in the newly proclaimed Indonesian Republic. Two years later, supported by a travelling scholarship, he moved to the UK to carry out doctoral studies at London School of Economics, returning in 1949 when he accepted a lectureship in economics at the University of Melbourne, rising progressively through the ranks to become professor of economics in 1962. By now his reputation had reached the ears of the International Labour Organization (ILO), which sent him to Ghana that same year to advise the government on wages policy.

Joe’s initial publications in the early 1950s focused on the problems of wage policy in Australia.   His interest in collective bargaining emerged strongly after visiting the United States on a Rockefeller Fellowship in 1956.  In 1967, he was appointed by the Commonwealth government to a new part-time role as president of the newly-established Flight Crew Officers’ Industrial Tribunal, a stepping stone to his 1974 appointment to the Australian Conciliation and Arbitration Commission, where he served as deputy president until 1987, the first economist to occupy this post. Here, he was universally respected by all sides for his courtesy, clear-headedness, and deep understanding of labour markets.

Joe’s desire to mould and shape economic landscapes drove him into accepting numerous industry roles alongside his academic endeavours. He was asked to serve as government consultant in wages policy for Fiji (1966), Papua and New Guinea (1970), Indonesia and Timor Leste (2002), and as economic adviser for Maansha, China (2011).

Joe was president of the Academy of Social Sciences (1985-1987), a member of the OECD Expert Committee on Labour Market Flexibility (1985), and chair of Qantas Pilots Grievance Board (1988). After leaving Monash in 1973, he continued to make valuable contributions to the industrial relations field through his academic writings, especially on the merits of legislative reform and the importance of regulatory design.

In addition to holding numerous prestigious posts, including the presidency of the Economic Society of Australia and New Zealand (1969), membership of the Royal Commission on Australian Government Administration (1974-1976), and serving as deputy chancellor at Monash University (1980-1988), where in 1987 he was appointed emeritus professor.

Joe received countless honours and distinctions.  He was made an Officer of the Order of Australia (AO) in 1989, and awarded honorary doctorates from Monash (1991) and Melbourne University (2001).  In 2002, Joe launched the archives of former Australian Conciliation and Arbitration Commission president Sir Richard Kirby. The following year he received a Centenary Medal.

In 2010, the University of Melbourne and Monash University collaborated to recognise and highlight his outstanding contributions by creating the annual Joe Isaac Symposium, which provides contrasting perspectives and challenges in the field of employment regulation.

Joe had a well-deserved international reputation and was much sought-after overseas for his wisdom, knowledge and powers of conciliation. Students remember his lectures for the clarity of his presentation and the quiet fervour brought to the task. His door was always open for students and colleagues to visit.

According to Massachusetts Institute of Technology’s Professor Thomas A. Kochan, former president of the International Industrial Relations Research Association: "Joe Isaac was a stalwart leader in Australian economic and labor policy and academic affairs for many decades, and a role model for all of us who were fortunate to learn from his wisdom and experience.  Our field of industrial relations holds in highest regard leaders who excel in research, teaching and mentoring, and public service. No one did this better and with more humility than Joe Isaac. His legacy will live on through the annual symposium and through the lessons he taught us by his words and actions."

In 1991, upon being awarded Monash’s Honorary Doctorate of Economics, Joe enthusiastically described the qualities of a good wheel, expressing that adaptability was key for its optimal functioning. After confusing most of his audience with his analogy, he concluded: “The same applies to the market. The appropriate degree and nature of intervention in any activity must be judged in the light of its particular circumstances and factual basis, balancing cuts against benefits.”

Just like the ideal wheelwright, Joe possessed a rare combination of gifts. An expert craftsman, he invested assiduous attention to detail in all of his endeavours. While he may not have fulfilled his wish to become a doctor, his wisdom, counsel and humanity in his chosen field were of equal measure. As Monash University’s President and Vice-Chancellor, Professor Margaret Gardner AO, said: “In medicine he would be revered as a great clinician researcher, and that is what he was for us.”