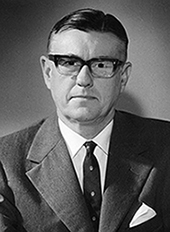 Former long serving registrar James Douglas Butchart OBE died in Melbourne on 5 September 1998 after a long illness. He was 78.

In private life an active rifle club member and champion marksman, and in the wider world a senior leader and commissioner in the Australian Scouts’ Association, Jim Butchart joined Monash in November 1960 from the University of Sydney, where he had been assistant registrar for a decade.

Margaret Telfer, registrar of Sydney University, asked to comment on Butchart’s application to join the soon to be opened Monash, noted his “many good qualities” but added “he is not really an easy colleague, being rather set in his ideas and rather lacking in spontaneity and enthusiasm”.  She suggested: “Why not get him down and see how you react to each other?” Fortunately the reaction was positive on both sides.

Working as assistant registrar with the foundation Vice-Chancellor, Dr Louis Matheson, and the first registrar, Frank Johnson, Jim Butchart began energetically and skilfully to document a detailed set of procedures, statutes and regulations governing the academic administration of the university, and establishing a Monash tradition of an efficient, centralised bureaucracy.

In his dealings with staff and students, Butchart was often forthright and outspoken and could appear rigid and uncompromising.  His motivation was not personal advantage, but a professional determination to maintain high standards and administrative consistency as the young university grew and developed.

His watchful regard for precedent and his orderly mind, with its seemingly endless capacity for recalling the detail of complicated university rules and procedures, underpinned his clear and firm advice on their interpretation.

Butchart liked to insist on his senior colleagues applying the relevant rules strictly and to discourage them from arguing exceptional cases. In turn they trusted him to follow with integrity and rigour his own dictum that “academic needs are more important than administrative convenience”.

He was promoted to deputy registrar in 1963 and academic registrar in 1965 (retitled registrar in 1980). The administrative procedures he had established proved to be a sound foundation for Monash’s rapid growth from a few hundred students in 1961 to more than 10,000 a decade later.

By then there were seven faculties on the Clayton campus. Each of them had a faculty secretary based in the dean’s office, but reporting to the registrar. Butchart thus had his own eyes and ears in each faculty, ready to alert him to any emerging local issues that required assistance, guidance or correction from the central administration.

Less formally, and as he had earlier done successfully at Sydney, Jim Butchart founded a regular lunch club to which were invited key professorial and senior sub-professorial academic colleagues. This was a congenial gathering, and also ensured that the registrar was up to date with developments and currents of opinion across Monash that he found it needful or useful to know.  He also enjoyed sharing with table companions his acute observations of academic foibles, summarised pithily with a dry and often biting wit.

For someone so identified with maintaining order and good government in the university the “student unrest” that erupted at Monash in the late 1960s was an extremely painful time for Butchart. He claimed privately that for more than two years he was kept fully occupied, but prevented from doing much of the core administrative work for which he was paid. He remained in his post - stoic, steadfast and imperturbable - until the troubles subsided and passed.

A framed “Wanted” poster announcing the trial of Matheson, Butchart and others for “crimes against the people” and “illegal use of the university” hung on his office wall. He was apt to say late in his Monash career that the names of the major student players in the events of those times “are engraved on my soul”.

James Douglas Butchart was born on 23 August 1920 in Strathfield, Sydney, the only child of Les Butchart, a World War 1 ex-serviceman of Scottish descent whose soldier-settler dreams were shattered by bad seasons, and Kathleen, nee Dawson, whose ancestors arrived at Sydney Cove in 1788 with the First Fleet.

Jim’s father died on his fifth birthday, and times were hard for him and his mother.  After completing his schooling at Sydney Technical High School, Jim joined the New South Wales public service in 1936, qualifying at night school for a university place he could not afford to take up.  Later a state government cadetship enabled him to study part-time at Sydney University for a Bachelor of Economics degree, awarded in 1943.

In 1944 he joined the Second AIF and was posted to Melbourne as part of the legendary Alf Conlon’s “directorate of research”, a special intelligence unit based at LHQ Victoria Barracks.  He lived at Trinity College, combining war service with part-time studies at Melbourne University for a Bachelor of Arts degree, awarded at the end of 1945.

Jim married Isabel MacLean, a fellow member of the special intelligence unit, in Melbourne on 4 December 1945.  They made their home in Sydney, where Jim began his career in university administration at Sydney University and remained until he joined Monash in 1960.

As a marksman he joined the Concord Rifle Club in Sydney in 1936, aged 16.  He transferred to the Melbourne Cricket Club (MCC) shooting section when he came to Melbourne in 1960.  He relished this game of skill, describing it as “a real challenge to your ability to co-ordinate hand, eye and nerve”. In 1988 his stellar career as a rifleman was recognised when the MCC bestowed on him its Hans Ebeling Award for outstanding service to the shooting section of the club.

From 1968 to 1976 he served as Chief Commissioner of the Victorian Branch of the Australian Scouts’ Association, and on 2 June 1973 he was appointed an Officer of the Order of the British Empire (OBE) “in recognition of service to the scout movement”.

As registrar Butchart provided valuable continuity when Professor Ray Martin began his vice-chancellorship in 1977.  He remained deeply conservative, believing that to best support their proper role and purpose in society Australian universities should continue to follow the well-tested administrative practices of the Anglo-Scottish tradition.

In November 1985, interviewed for Monash Reporter ahead of his retirement, the outgoing registrar warned that universities risked being overwhelmed by the interests of colleges of advanced education. The CAEs, he said, were now “aping the universities” which needed to work hard to make clear to governments and the community the distinction between their roles and those of the colleges.

Butchart also criticised special student admission schemes, and urged universities to keep to an elitist path of selection based on identifying high intellectual ability, instead of trying to “make good the deficiencies in primary and secondary education”.

On 25 February 1986, accompanied by Vice-Chancellor Ray Martin, Jim Butchart called on Dr Davis McCaughey, Governor of Victoria and Visitor to the University, to advise him formally of his retirement as Monash’s registrar.  This took effect three days later.

The Professorial Board acknowledged Butchart’s 25 years of dedicated service with a generous minute of appreciation at its meeting on 28 April 1986.

On 1 April 1987 James Douglas Butchart became the first former senior academic administrator in the university’s history to be admitted to the Monash degree of Doctor of Laws (honoris causa). The citation presenting him for the award was delivered by his friend Professor Ross Day, foundation professor of psychology at Monash.

He was survived by Isabel*, their daughter Barbara and son John, and three granddaughters.