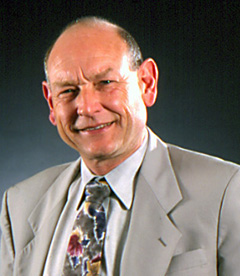 Professor Le Grand’s achievements as Dean were significant and included initiating the Faculty of Arts’ engagement at a range of international locations, particularly the Prato Centre and Malaysia. During his period as Dean, the Faculty introduced the Global Bachelor of Arts and began the expansion of its operations to the Caulfield campus. Professor Le Grand was also highly respected and regarded as a colleague by his fellow Deans of the University.

Through his Deanship, Professor Le Grand continued to be an active researcher and teacher and was a particularly popular lecturer in “Making Knowledge: modern scientific controversies” and “Thinking about Science” (a course Professor Le Grand developed).

Following his retirement as Dean of Arts, Professor Le Grand continued to contribute to the University as an Emeritus Professor within the School of Philosophical, Historical and International Studies. Colleagues of Professor Le Grand will particularly recall his cars - 1967 Ford Mustangs. The most memorable one which he drove regularly to Monash was coloured powder blue and proudly displayed bumper stickers from his “alma mater” the University of North Carolina.

The University community extends to Professor Le Grand’s wife, Brenda, and his family its sincere condolences.