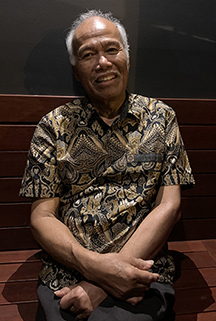 Poedijono, who  died in January aged 80 years, was a bridge not only between Australia and Indonesia but between the islands of the archipelago itself. Through his work as a puppeteer, composer, dancer and musician, he united both Eastern and Western cultures as well as Javanese and Balinese traditions.

Poedijono knew inherently that one of the best ways to transcend boundaries and build collaboration was through the universal language of music, due to its powerful ability to both shape and reflect society. His wide-ranging talents encompassed the performance of Indonesian music of many kinds,  as well as dance and puppetry, and his passion and experience inspired students and community groups in Melbourne for many years. As founder of the ensemble, Melbourne Community Gamelan and co-founder of Mahindra Bali Gamelan,  his groups performed extensively in Melbourne, regional centres and sometimes abroad. When he first arrived on these shores there were only a few sets of gamelans in the country. It is thanks to him that today Australia has more than two dozen sets owned by various cultural, educational and private companies which are in regular use.

Poedijono came to Monash in 1972 as a temporary lecturer in Javanese gamelan performance at the invitation of Emeritus Professor Margaret Kartomi, who was then a lecturer in the music department, with a strong research interest in Indonesian culture. At the time, he spoke little English but agreed to “try his best” at teaching gamelan to Western students. The gamble proved to be a resounding success and in 1980, following subsequent temporary appointments, he was made a senior tutor with tenure. Both students and colleagues alike were infused with his energy and passion, which was underscored by his gentleness and a self-deprecating humour.

Despite a lack of the usual academic qualifications, Poedijono’s role at Monash was considered of great importance, not only to the department but to the University as a whole, in terms of strengthening cultural and educational links with Southeast Asia. During the first 12 years he taught gamelan to more than 14,000 students from different schools and universities in Victoria and presented a series of productions of Javanese music, dance and puppetry bringing together students and Indonesian artists living in Melbourne. He introduced the use of English in wayang performances, skilfully weaving the vernacular into the original dialect. In 1994, he was promoted to lecturer,  and continued to supervise honours and PhD students, taught summer school courses in Indonesian music and assisted in the translation of Javanese song texts. He organized, directed and starred in numerous performances throughout Australia, especially in Melbourne. It was rare indeed to come across an all-round performer who excelled in each aspect of their art and his reputation became legendary. Upon his resignation in 1996, Mal Logan, the then Vice-Chancellor, personally acknowledged the enormous contribution he had made  in exemplifying the ethos of the University.

Poedijono was born in September, 1940, in the town of Wonogiri, Central Java, close to Solo, the cradle of Javanese culture in the province. Performance was clearly in his blood; both his father and uncle were professional dalangs (puppeteers). By the age of six he was as familiar with the world of wayang (traditional puppet theatre) as other children were with comics or cartoons. His father would take him to all-night performances where he watched every gesture and listened intently to each musical phrase of the gamelan, filled with enchantment as if hearing it for the first time. He became so familiar with the plays’ various characters that he would adroitly hand the puppets to his father when they were needed in each act.

Despite his young age, he taught himself to notice the subtle nuances of each performance, and to know what each unearthed. In the dark of the performance, without any notation, he learned by absorbing the sounds into every fibre of his being, finding what he described as ‘the love in every melody and the message in every symphony’.

At the age of nine, he staged his first performance as a puppeteer, debuting with the one-hour act, Mucuki. It launched his career as a dalang, and he began to put on longer shows. At the age of 16 he was in charge of all-night performances in his home town.

His education was formalised at the Indonesian Arts School (SMKI) in Surakarta, Central Java, where he studied traditional puppetry and gamelan using notation for the first time. Afterwards the school’s principal offered him a position teaching Javanese music, dances and other performing arts. His work took him to Bali where he met Merthi, a Balinese dancer and teacher (Merthi, incidentally, played the masseuse in the 2012 AAMI commercials who praised Rhonda’s “beautiful” brake foot.) Together they had two daughters, Eka and Ade, also dancers, and later became grandparents to Ellisya, Tanisya, Maliya and Maia.

After retiring from Monash, he taught in New Caledonia, Hong Kong and Abu Dhabi. A biography by I Wayan Dibia, entitled  Poedijono, A Multitalented Artist Crossing the World, was published in 2019.

Poedijono never took up Australian citizenship. He pointed out that when walking down Melbourne’s Swanston Street, people would look at him and still see an Indonesian, and he was proud of that. Throughout his career, he was careful to keep culture and politics separate and knew that peace began with a smile (and his was luminescent).  Wherever there was a gamelan, he felt at home.

Edited version of article published in The Insider, 5 March  2021.