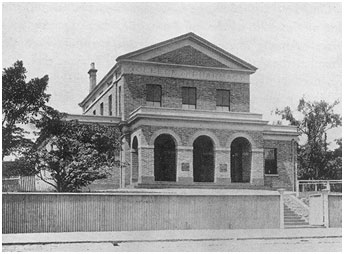 The college was established in 1881 as the Melbourne School of Pharmacy by the Pharmaceutical Society of Victoria, itself founded in 1857 by early immigrant British pharmacists to control and develop the professional aspects of pharmacy in the rapidly developing colony. The school was established on similar lines as the London School of Pharmacy, which was owned and operated by the Pharmaceutical Society of Great Britain.

The school was initially established in the Melbourne Technological Museum. It then moved to Fitzroy for a short period before finding a more permanent home in the County Court building at 360 Swanston Street, Melbourne. The Pharmaceutical Society purchased the premises in 1882 and carried out sufficient renovations for classes to commence at the site in 1884.

The first classes were established under an apprenticeship system, which involved attending the college for tuition in chemistry, botany, materia medica and pharmacy. Students could enter the course at any date and pursue an independent course of study, leading to a registration examination, conducted by the Pharmacy Board of Victoria. A compulsory syllabus was formalised within the Medical Act 1915 and subsequently led to a four-year apprenticeship and study requirement for registration.